A day in Wat Rong Khun - The white temple in Chiang Rai, Thailand

Unlike most of the golden temples in Thailand, Wat Rong Khun is painted with the pure white. Known as the white temple, this is the most attractive tourist spot in Chiang Rai as well as one of the most beautiful architectural works not only in Thailand but also in the world. 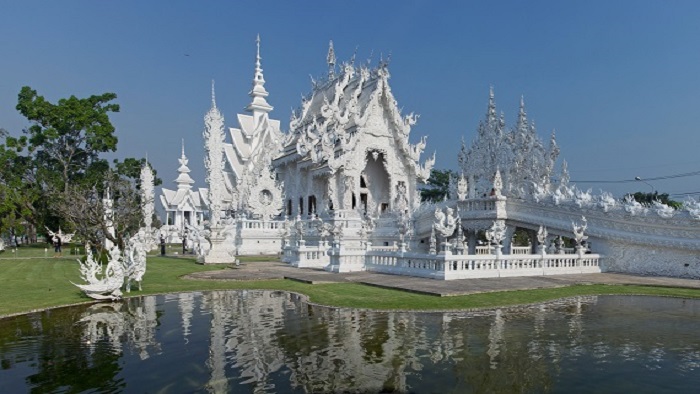 Wat Rong Khun Temple is located in Chiang Rai Province in northern Thailand, which is famous for its architecture covered in a white color, different from the traditional golden color of the Thai temples. This idea is from a famous Thai artist and architect, Chalermchai Kositpipat. Accordingly, this temple is a combination of classical Thai architecture and surreal style, symbolizing the purity of the Buddha.

Although the construction was started in 1997 until now Wat Rong Khun temple has not been totally completed. Mr. Chalermchai once said that a complex of 9 main buildings that are sophisticatedly decorated but still carry the ancient features of glass and plaster materials. These 9 works include the main hall, the hall, the revered site of the Buddha, the chapel, the museum, the art gallery, the dining area, etc.

In early May 2014, a 6.3-magnitude earthquake in Chiang Rai caused damage to people and property here, Wat Rong Khun also did not escape that common fate. The walls of the main building were cracked and the paintings on the walls were damaged. Even a large part of those paintings was completely destroyed. But that does not stop the popularity of Wat Rong Khun, so far this is still a pilgrimage spot attracting many domestic and foreign tourists. 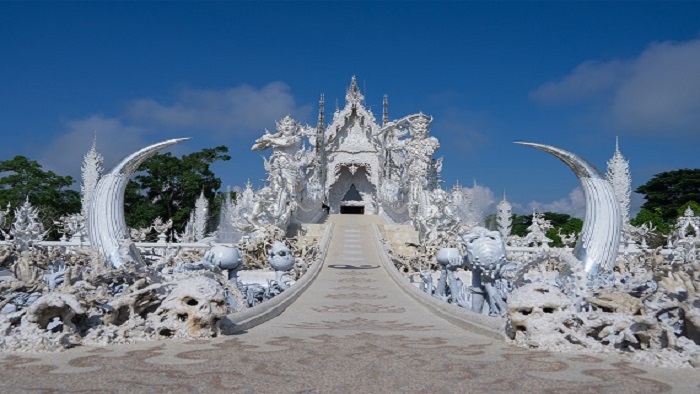 Wat Rong Khun is covered with white and surrounded by sparkling glass pieces. The entire complex is dotted with evil statues, skulls, and fake heads hung from trees and many other strange objects.

In order to reach the main hall, tourists have to go through the "reincarnation-rebirth" bridge across the deep water moat with hundreds of arms rising out of the water symbolizing ordinary earthly desires. Next to the moat is a mythological statue of a half-human-a-half-bird Kinnaree of Buddhism. This is considered the area representing the hell where human suffer the punishments for what they have done in the past. So, the bridge is called the bridge of "reincarnation-rebirth". It means if the dead people go beyond the cycle of death and suffering, they will reach the realm of freedom that leads to the path of happiness.

After passing through the bridge, you will see the gate of paradise. The gate is protected by two giant creatures, representing peace and death. At the end of the bridge that are some images of Buddha in meditation.

The main hall is a white building with pieces of reflective glass of plaster. The main hall is elaborately decorated from the design of the classic Thai temple such as the 3-storey roof and stylized Naga snake to the modern colorful murals with supernatural characters.

Every detail in the architecture of Wat Rong Khun temple has its own meaning that reflect the Buddhist teachings showing the way to escape the temptations, greed, and desire in the world while praising the pure mind and the human intellect.

The temple has all 9 buildings, including the main hall, a storage room for relics, a meditation hall, monks' residences, and an art gallery.

A unique feature of the Wat Rong Khun temple is that in the middle of the pure white, there is a beautiful yellow house that if not introduced, surely everyone thought it was a special architectural work. In fact, that's not what you think, it's just a two-story toilet that is pretty picky, eye-catching and worth building up to 5 million baht. If you say it is the ‘luxury’ toilet in Thailand, it is not wrong at all. 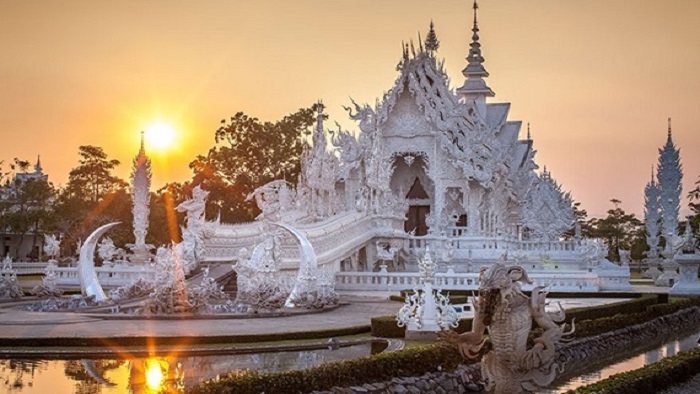 The sparkling Wat Rong Khun temple under the sunlight

In order to visit Wat Rong Khun, you can use the means of public transport such as bus, songthaew car. The bus departs from the bus stop near the night market in Chiang Rai city center and takes only 30 minutes to reach the temple. The temple opens from 8:00 to 18:00 daily with no entrance fee, so it is easy for tourists to enjoy the serene space in the temple. However, before going to the temple, you should dress modestly. Don't wear colorful or revealing clothes. Photos are not allowed in the main building.

If you are in Thailand, don’t forget to visit this temple. It is a great place to admire the high aesthetic arts and pray for the peace. We hope that you have an unforgettable time in the beautiful country of Thailand via our Asia tour packages. Thank you and have a nice trip!