Referring to Quang Ninh tourism, everyone will think about the UNESCO Wonder of The World Halong Bay, crowded Bai Chay beach, or interesting Co To island, etc. However, Quang Ninh also has a must-visit island that few people know which is Ngoc Vung.

Located in Van Hai cluster of islands, Van Don district, Ngoc Vung is a 12-square-kilometer island, with the ancient port of Cong Yen under the Van Don trading system, and the ancient monuments of the Mac and the Nguyen dynasties. Ngoc Vung is located between Hon Net and Phuong Hoang islands. From above, Ngoc Vung island looks like a velvet scarf, where there are many bright white spots as floating on the water.

Ngoc Vung island formerly had countless rare pearls, glowing a part of the sea every night. Ancient people said that at night since the offshore boats often saw the light of the mussel pearls in the sea throughout a region that was around the island, it was named Ngoc Vung (Pearls Glowing). 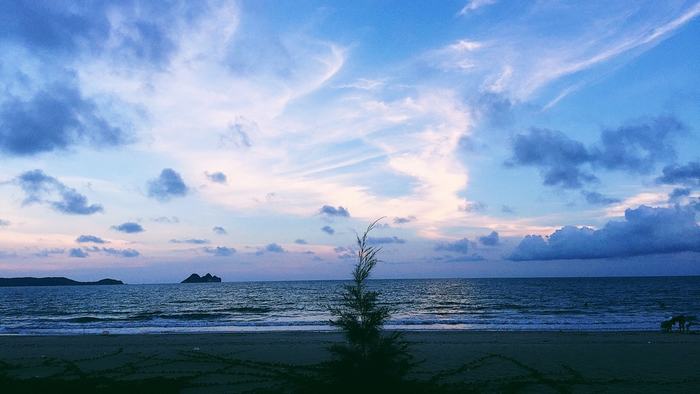 This unspoiled island has only a concrete road connecting from Ngoc Vung port to the center of the island, running along the length of the beach. The beach in Ngoc Vung is very beautiful with the blue water, smooth white sand, and long, pristine beach, stretching nearly 3 kilometers, bending as a moon and leaning on the casuarina forest.

Truong Chinh beach is a famous tourist destination located in the south of Ngoc Vung. This name origins from the trip in 1962 of Truong Chinh, a Vietnamese politician to the island to visit the local people. To commemorate, people in the island named the most beautiful beach and the nearby path as Truong Chinh.

The beach is around 3 kilometers long where the white sand is flat and it still preserves the pristine. The beach water is blue, slope is slight and not too deep, so it is really suitable for swimming. From the center of the island, it takes about 15 minutes to walk to the beach. 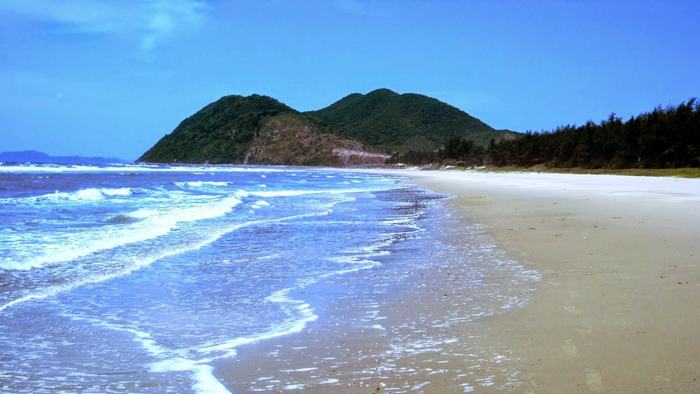 Ngoc Vung island is a location bringing in itself the rich historical relics that attracts many explorers. The ancient citadel was built in Binh Ngoc village, Ngoc Vung commune, Van Don district, so people often call this ancient citadel Ngoc Vung. According to archaeological data, the citadel was built from the Mac dynasty and rebuilt in the Nguyen dynasty. It was also renamed as Vinh Hai or Ngoc Vung.

Cong Yen and Cong Hinh are two ports in the northern area of Ngoc Vung, which once were the busiest and most important ones of the Van Don trading system from the Ly dynasty to the Nguyen dynasty, but the most flourishing period was in the Ly and Tran dynasties. At present, Quang Ninh has put in place a policy of preserving, restoring, and promoting the historical and cultural values of vestiges of Cong Yen and Cong Hinh in particular, as well as the Van Don commercial port system in general. It can be said that among the ports of Van Don, the ancient port of Cong Yen belonging to the beautiful Ngoc Vung island so far has left a deep impression on visitors.

Biking around the village

On Ngoc Vung, there is only one concrete road stretching across the island. This road connects from the ancient port of Cong Yen to the center of the island and runs through the length of Truong Chinh beach. In the midst of the cool sea breezes, poetic scenery along with the beautiful nature will offer you and your team the most comfortable moment when cycling around the island. 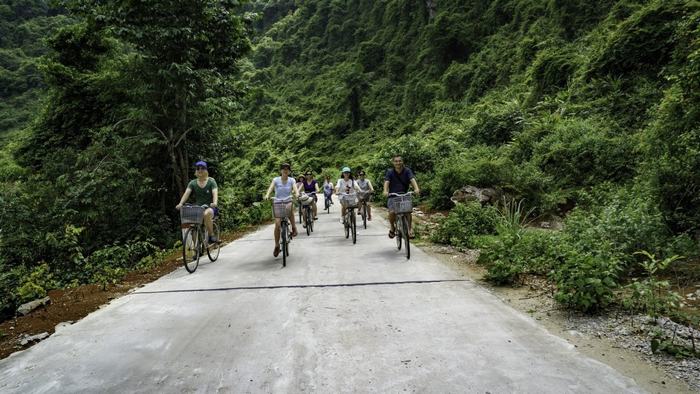 Cycling around the village

Camping on the coastline

Ngoc Vung island has a relatively good accommodation service to tourists, but if you want to immerse yourself in nature and experience the wildlife, you can organize camping activities and campfire right outside the beach.

Like many other islands in Vietnam, coming to Ngoc Vung, tourists will come to a world full of seafood like crabs, squids, shrimps, etc. Groupers are not strange to the sea people, but by processing in the wildlife, hotpot groupers become a delicious food with a strange flavor that no one can forget when traveling Ngoc Vung island. In addition, Ngoc Vung scallop is 5-6 times larger than the scallop we often see. In Ngoc Vung, this is a species of natural freshwater that cannot be raised and cannot live anywhere else. The scallops are very sweet, can be baked, cooked into porridge, soup, or hotpot.

Not as famous as Halong Bay, Co To island, or Quan Lan, Bai Chay, etc, but the attractive, wild, and beautiful beaches with various activities in Ngoc Vung island will surely make your Vietnam tours as well as Asia tours unforgettable. If this is helpful for you, please like and share with others. Thank you.