The Temple of Literature & Imperial Academy - one of the top must-see destinations in Hanoi, Vietnam

Being considered the first university of Vietnam, the Temple of Literature – Imperial Academy is not only a famous historical relic but also the place containing the quintessence of the earlier periods of feudal history and preserving the traditional values of Vietnam. If you have a chance to visit beloved Hanoi, do not forget to book the best Vietnam tours to get the best moments in Vietnam.

Brief of the Temple of Literature and Imperial Academy 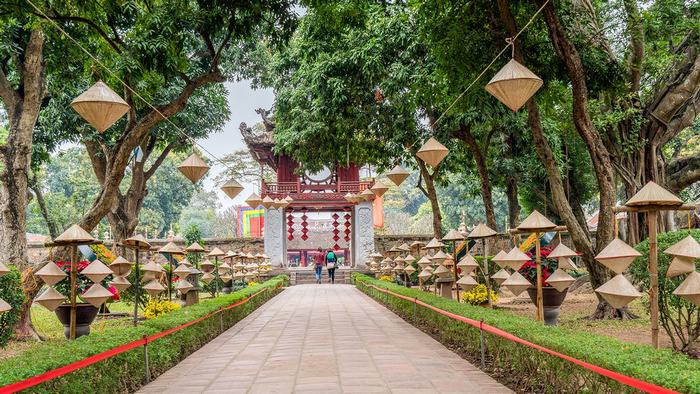 The Temple of Literature

This was a work built to encourage the study spirit of all people in the country as well as to find out the talented people to work for the country. In short, it is the first national university of Vietnam where the talent people were found and worked for the Kings.

The unique structure of the Temple of Literature and Imperial Academy

The relic complex has the area of 54,331 km2, surrounded by brick walls. It is covered by 4 streets. They are Quoc Tu Giam street (in the south), Nguyen Thai Hoc street (in the north), Ton Duc Thang street (in the west), and Van Mieu street (in the east). Below is the today structure of this complex.

Literature lake is in front of the Temple of Literature, separated from the inner by Quoc Tu Giam street. It has the total area of more than 12,000 m2 with Kim Chau mound in the middle where the students went here to exchange about the literature. Giam garden runs along the wall in the west of the inner. This area starts with 4 pillars and 2 stelae commanding horsemen to dismount. When coming here tourists will have a feeling of comfort and freshness. 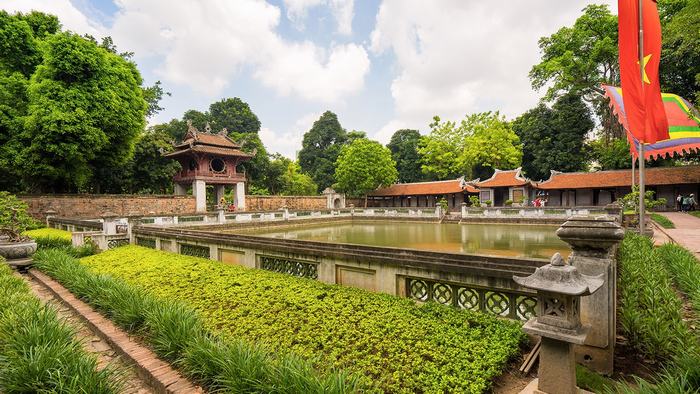 There are 5 small parts in the inner and each of them is separated by brick walls and doors.

The first and main gate “Van Mieu Mon” is built in Vietnamese typical style. In the middle, there is a gate which is similar to the Buddhist gate. After passing this gate, tourists will get to the Great Middle Gate “Dai Trung Mon”. There are two small gates in this gate – Accomplished Virtue and Attained Talent Gates (Thanh Duc Mon and Dat Tai Mon). The names of these gates have the meaning of training and educating the good and talented people.

The third part of the inner is Stelae of Doctors garden. This area is connected by the constellation of Literature pavilion (Khue Van Cac), Crystallization of Letters gate, and Magnificence of Letters gate. There is a well named Well of Heavenly Clarity (Gieng Than Quang) in the middle of the area.

The two ranges of stelae of Doctors have 82 stelae and each side has 41 located proportionally through the well.

The fourth courtyard is the center and the main architecture of the Temple of Literature and Imperial Academy. It is the place to worship Confucius and famous people with 2 main parts including Dai Thanh and Bai Duong.

The final layer is the Thai Hoc area. There are a lot of works built here to worship Chu Van An, King Ly Thanh Tong, King Ly Nhan Tong, and King Le Thanh Tong. Besides, the Centre for Scientific and Cultural Activities of Van Mieu – Quoc Tu Giam is built here to help to maintain the structure. 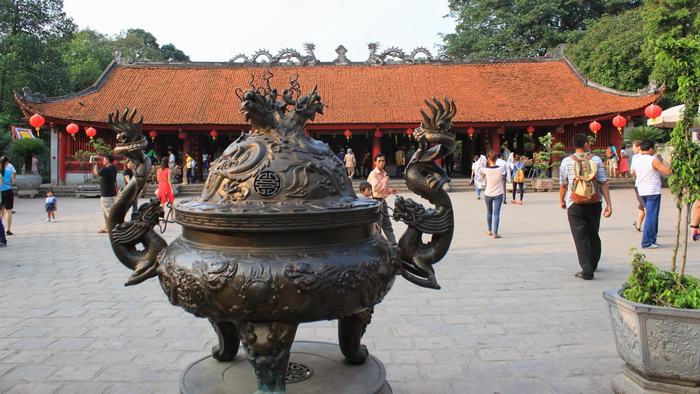 The Temple of Literature and Imperial Academy has been preserved and promoted until nowadays. And it has become the important tourist destination of Hanoi in particular and Vietnam in general.

NAVIGATE The Temple of Literature & Imperial Academy - one of the top must-see destinations in Hanoi, Vietnam