A trip to Hoan Kiem Lake - The symbol of Hanoi capital

Not only being the cultural and historical symbol of Hanoi, but Hoan Kiem Lake is also a favorite destination for both domestic and international tourists when traveling to the capital of Vietnam. In your Vietnam tour groups today, let’s discover this famous place with us.

The lake appeared very long, about thousands of years ago. Before having the official name Hoan Kiem Lake, the lake had many names associated with different stories such as the Luc Thuy because of the green water all year round or Thuy Quan Lake because this is the place where the court trained marine corps.

The name of Hoan Kiem was officially introduced in the early 15th century with the legend of King Le Thai To paying the sword to the Turtle Goddess after borrowing to defeat the Minh invaders. He then became King and built the prosperous Le dynasty.

It was told that when Le Loi led the Lam Son rebellion in Thanh Hoa Province against the Minh army, he accidentally caught the Thuan Thien sword giving by a turtle. Thanks to that precious sword, he won the battle consecutively and came to the throne at the beginning of the year 1428. 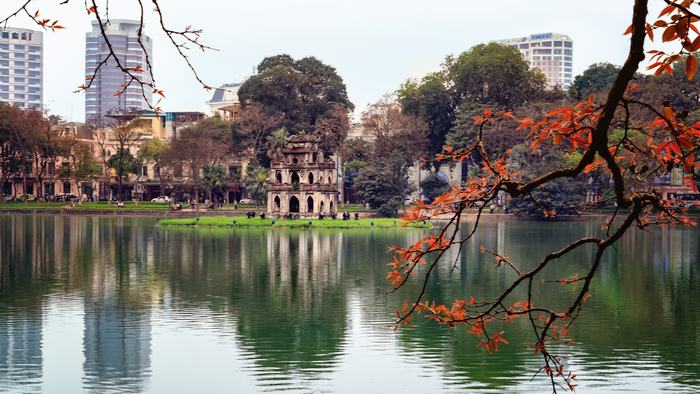 Once cruising on Luc Thuy Lake, the Golden Turtle suddenly emerged. When the king drew his sword, the turtle put the sword down to the lake and never appeared again. The king thought that goddess lent sword and took back when the country was peaceful, so the lake was renamed Hoan Kiem Lake (means giving the sword back). However, at the end of the 16th century, Trinh Lord divided the lake into two parts:  the left and the right then named Vong. In 1884, the right part was filled up by the French colonialists to open up the capital, while the left one was retained as Hoan Kiem Lake today.

Ngoc Son Temple is one of the destinations that you should not miss when taking best Vietnam tours. Located on an island in the North of Hoan Kiem Lake, Ngoc Son Temple is connected to the land by the bright red The Huc Bridge. 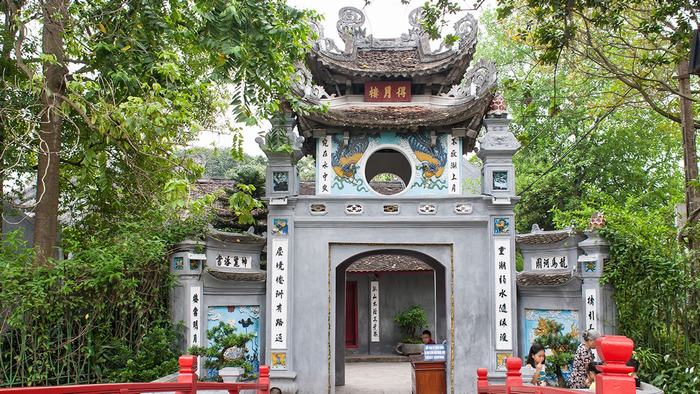 Coming here, tourists not only admire the amazing architecture in the traces of nostalgic time and see the panoramic view of Hoan Kiem Lake but also have the chance to learn about the culture and hear the stories associated with the history of the temple that very few know.

Along with Ngoc Son Temple, The Huc Bridge is the symbol for the charming of Hoan Kiem Lake in particular and Hanoi capital in general. With the unique architecture and the historical and cultural value, The Huc Bridge becomes the destination that tourists cannot miss when traveling to Hanoi.

Formerly, The Huc Bridge was shaped like a shrimp, made of wood and painted in red – the color of well-being and development.

At the end of the 19th century, the bridge was broken. The foot was rebuilt by concrete and the wooden rails and the red color was still retained. 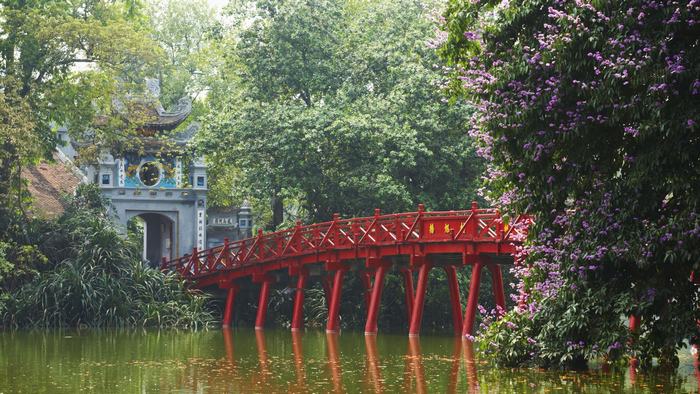 King Ly Thai To Statue is located at Ly Thai To flower garden on Dinh Tien Hoang Street, Hoan Kiem District. This work was built to commemorate and honor King Ly Thai To who laid the foundations for the construction of Thang Long Citadel.

Not only has the historical value, Ly Thai To flower garden and monument is also a favorite destination for locals and tourists in the late afternoon. Coming here, you can see the peaceful life of the capital and feel a very different Hanoi comparing to the ordinary bustle.

This is one of the traditional puppet theaters which still operates and always brings to audiences the colorful performances of traditional arts.

The special water puppet shows are not only popular with locals and visitors but also become famous over the world and are participated in the world art film festivals. 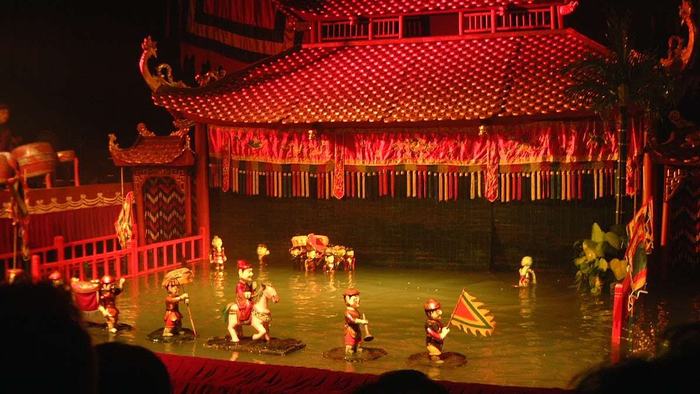 Although it has only been officially opened for more than one year, the Walking Street around Hoan Kiem Lake has become an ideal destination for locals and visitors every weekend. The most crowded time of the Walking Street is after 7 pm on Saturdays and Sundays.  When the city lights up, the street suddenly becomes crowded with people and attractive activities and games.

The most fascinating ones are music performances with many types such as saxophone, flute, violin, EDM music, rock, and traditional music. In addition, there are modern and traditional games that attract a lot of children and adults.

In other corners of the walking street, there are many stalls selling to he, star lanterns and old gifts that memorize about ancient Hanoi.

A trip to Hoan Kiem Lake can boarden your knowledge about Hanoi capital with the rich in historical and cultural values. All these interesting things are waiting for you in Hoan Kiem Lake. For more information about Asia package tours, you can visit our website. Share this article if you find it useful. Thank you!