The National Museum Of Cambodia is the largest museum of culture and history in this mysterious country. And this is also one of the most must-visit places to discover the culture and the masterpieces of arts of Cambodia you shouldn’t ignore in your Cambodia package tour.

An overview of the National Museum of Cambodia

The national museum of Cambodia holds one of the largest and valuable collections of Khmer art in the world, which includes the masterpieces of Khmer artifacts of the glorious Khmer culture in the periods. The museum is the place saving over 14,000 items from prehistoric time to post-Khmer Empire time, which used to be a large strong empire covering entire Cambodia, a part of east of Thailand, and the south of Laos and Vietnam. 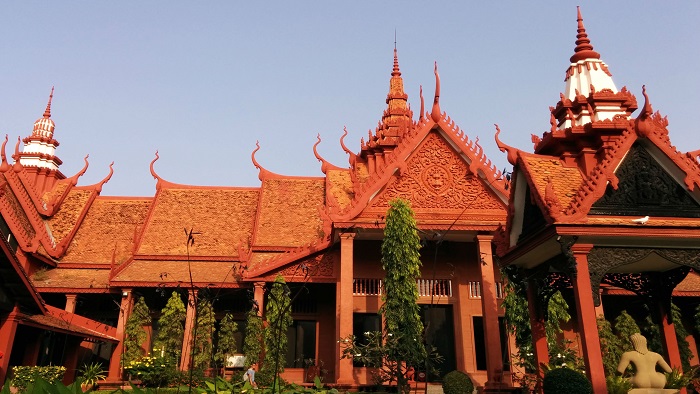 The national museum of Cambodia is located on Street 13 in heart of Cambodia capital, Phnom Penh. It is next to the north of the Royal Palace and on the west side of Veal Preah Man square and the Royal University of Fine Arts. The tourists can go into the museum through the entrance to the compound at the corner of Streets 13 and 178. The museum which was inspired by Khmer temple architecture were constructed within 7 years from 1917 to 1924, and officially inaugurated in 1920, and in 1968, it first was repaired.

The specific story of National Museum of Cambodia

The museum was designed by George Groslier (1887–1945), who is a historian, curator and Cambodia cultural lover, he felt pity of the ruin of the Khmer culture and desired to make Khmer culture great again. So the architecture of this museum is today ‘traditional Khmer’ architecture.

The very first stones for the museum's foundation was laid on 15 August 1917 and two years and a half later, the museum was inaugurated right in the event of Khmer New Year on 13 April 1920.

In 1951, the museum was under the control of the French and it was called as Musée National de Phnom Penh. Then in 1966, Chea Thay Seng became the first Cambodian who was the manager of the museum. Luckily during the control of Khmer Rouge regime from 1975 to 1979, it almost was preserved and less damaged and in the 1990s with contributions from the Australian Government, the museum was gone through the biggest renovation. Thanks to the support of the Cambodian Department of Museums, the museum now is playing an important role which is not just confined to preserving its exhibits but also to oversee other museums in the country. 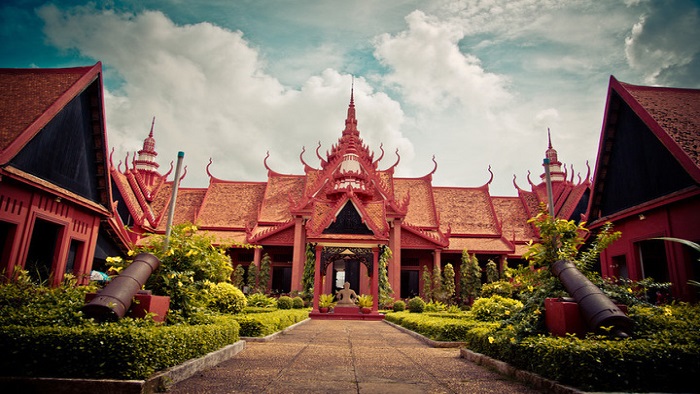 What it has in the National Museum of Cambodia

With an impressive red sandstone structure, the national museum of Cambodia is outstanding in the traditional Khmer architecture amongst the modern buildings around. The museum is such a treasure of Khmer or Angkorian culture and history with a lot of valuable artifacts portraying lively the cultural and social life of the ancient Khmer civilization. And with over 14.000 exhibits to its credit, these exhibits are the evidence for the rich of artifacts of this museum with the variety of bronze and wood sculptures, ceramic items, ethnographic items and stone articles which are categorized into four main periods in Cambodia history from the prehistoric, pre-Angkor, Angkor to post-Angkor. One of the most memorable and spectacular exhibits in the museum is the ancient statue of Lord Vishnu that exists from the 6th century. Another remarkable attraction you can catch in the museum is the image of King Jayavarman VII taken from Angkor Wat in a meditation posture in the West Gallery.

Visiting the museum, you will have a chance to take a peek at the bronze-casting methods which were used by the Khmer people during the glorious Angkor period from the 6th to 13th centuries. Next, to the Bronze Gallery, you will see the priceless ancient statues of Buddhas in the post-Angkor era. In addition, there is also a gallery being on display the selection of sandstone sculptures in the 6th century.

Some notes for tourists when visiting the museum

The museum opens from 8:00 a.m to 17:00 p.m. The admission fare is just nominal and it is free for children and students. Remember that it is not allowed to take photos in the museum, so let's be a respectful tourist following the rule. However, it is possible to take pictures of the courtyard and exterior. There are the services of French and English speaking guides, so you can come to them to have a deeper look at the meaning of each artifact. Besides that, if you feel interesting and want to know more about this museum, you can buy a booklet that provides the relevant information on locations of the museum’s most prominent exhibits. You can buy it from the store at the main entrance. 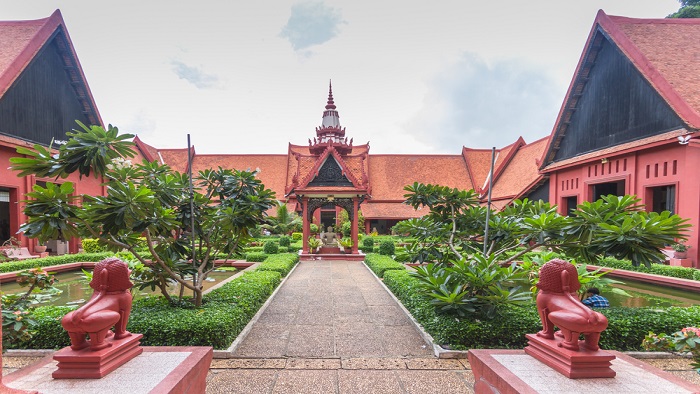 Adjacent the Royal University of Fine Arts, this place is the predecessor of the École des Arts Cambodgiens founded in 1918 under the supervision of George Groslier to teach students in the arts, and it still continues till nowadays.

Following the guided tours of Asia, you will have a chance to know more about the interesting destinations in Southeast Asia and useful tips for traveling in this area. Cambodia is still a mysterious country which makes a lot of tourists curious about it, so don’t hesitate to come to this country to see how beautiful it is. If you need further information about Cambodia or Cambodia destinations, please feel free to contact us. Thank you!

NAVIGATE An Afternoon In The National Museum Of Cambodia Phnom Penh