Cambodian has a lot of beautiful landscapes attracting many tourists to visit. One of the ideal destinations to see sights while enjoying the beauty of ancient architecture in Cambodia travel tours is the Baphuon Temple in Siem Rea.

Where is Baphuon Temple located?

Baphuon is an ancient temple in the northwest Angkor, Cambodia. This temple is located in Angkor Thom, in the northwest of the Bayon. The Baphuon Temple was built under the reign of King Udayadiyavarman II (from 1049 to 1065) and famous for its Nirvana Buddha statue carved on a 40 m long stone wall. The Baphuon Temple was built to worship Shiva. This is considered the greatest and most spectacular temple after Angkor - a familiar name to international tourists when talking about Cambodia tours. 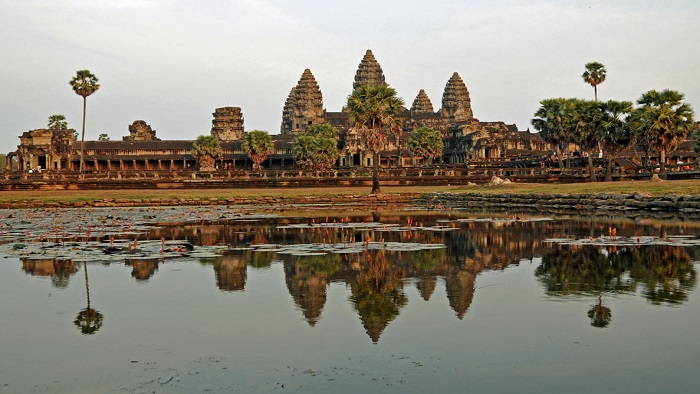 Why is Baphuon Temple mysterious?

About 50 years ago, when Baphuon Temple was first discovered, the ruins of Baphuon urged the scientists and archaeologists to restore this monument. It is decided to "save" this destructive historical work of "destroying" it. As planned, they detached pieces from the temple, numbered the stones and then assembled them into a more solid structure. However, the rescue of Bayphuon by French archaeologists accidentally ruined the monument, which until today, it is a difficult problem for the scientists. Removing all the stones and bricks to restore the monument was unfinished because the Khmer Rouge army devastated most temples, monuments, and Baphuon into meaningless rubble. 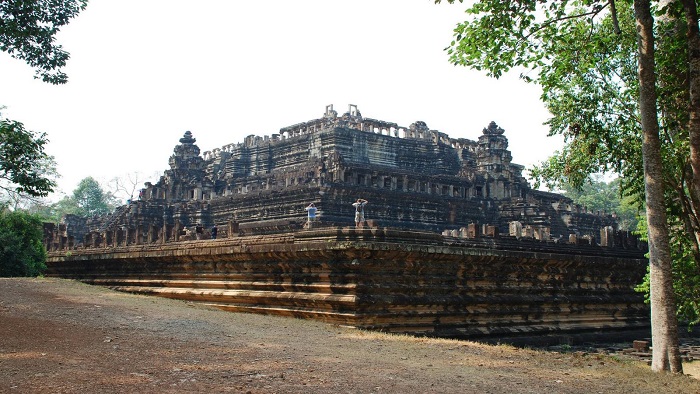 Visiting Cambodia at Baphuon Temple, you will feel interested like the people who have come here by the mystery of this temple. The numbers that the scientists marked on the bricks and stones at the time became an unsolved problem. for today's scientists in restoration. The Baphuon Temple is considered "one of the largest puzzle games" in the world.

The unique architecture of Baphuon Temple

Baphuon Temple is a pyramid representing the Hindu mythology of Mount Meru and marks the center of the city before Angkor Thom. The massive area of the temple was ranked second only after Angkor Wat. Baphuon was also once one of the most beautiful temples in the Angkor temple complex.

The beauty of Baphuon work is in the magnificence of the large blocks of stones laid out in spacious corridors with wide airy windows. The Baphuon temple was built on a hill with three floors, following the Khmer architectural style on a square plane with four directions of the door. The high rock steps have honored the majestic appearance of the temple. Standing on the top of the temple, you can zoom your eyesight in and out to see the magnificent works of Angkor Thom covered in the ancient shadows from thousands of years ago.

The ancient Sanskrit texts on the path, the stone carvings hidden the mystery of the glorious Angkor civilization are the attractions of Baphuon Temple. At the entrance of the west gate in Baphuon Temple, visitors always stand longer than usual to admire the famous Buddha statue of Nirvana, carved on the 40 m long stone wall. The Buddha statue headed north, legs stretched south, cleverly lay on the west side, and the head on the right hand.

This work is considered as an architectural mark of Baphuon, which creates a distinct beauty to identify this temple as compared to the hundreds of other temples in Cambodia. This is also living proof of the conversion of the Khmer faith through historical periods. If originally Baphuon was built to worship Shiva, then in the sixteenth century, the Baphuon became a Buddhist temple. 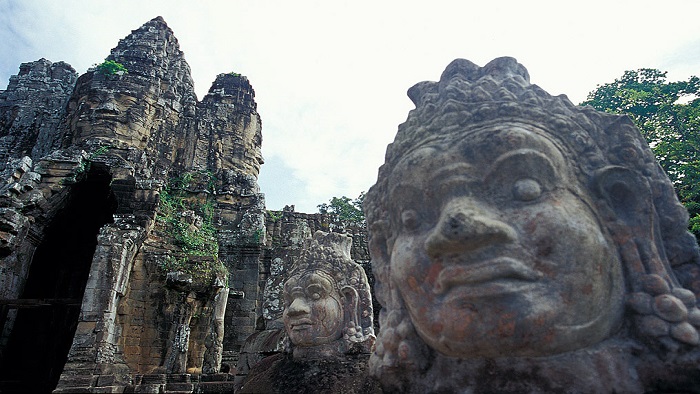 Every day, the Baphuon Temple welcomes thousands of international tourists to visit. In addition to the massive reconstruction, the scientists said that there are still 10 thousand stones still unknown the location. The mysterious numbers that French scientists left on the rocks are still a challenge that cannot be solved to this day.

Some rules when visiting the Baphuon Temple

Today, just passing through the Naga Snake Bridge, visitors can walk into the main entrance gate in the east to enter the holy world inside the Baphuon temple. In the belief of the ancient Khmer, snake Naga is considered as the guardian spirit of chasing ghosts. The long body of snake Naga along the path of the bridge symbolizes the rainbow connecting the heaven and earth as well as the world with Nirvana.

This is the way for the human to reach the holy place at the top of the temple. Modern Khmer people still attach great importance to preserving these sacred values. 11 curfew laws have been set for every visitor when entering the temple. They include in no touching in the rocks, no smoking, no noise, no wearing short dress and shorts, no pets, no sitting on the rocks, no littering, no spit, no bringing fork, and pregnant women and children under 15 years old are not allowed to enter the temple.

Baphuon Temple is definitely an impressive architectural work of Cambodia. Not only because of its ancient scenery, but Baphuon also has many interesting attractions for any visitor coming here. To know more information about Cambodia tours, via our website. Share this article if it is useful for you. Have a nice trip.