Besides ao dai, the image of the palm-leaf conical hat is also considered a symbol of the dreaming Hue city, bringing the soul and culture of people here.

In Vietnam, almost all the regions have the conical hat villages. The hats are made for the purpose of covering the head, but each region has its own characteristics in production. However, it can be said that Hue is Vietnam best places of producing conical hats.

Conical hat is very popular in the life of Hue people in particular and Vietnamese people in general. This kind of hat is extremely convenient, suitable for the tropical climate, and cheap also. Anyone can wear the Hue conical hat, from the elderly to children. 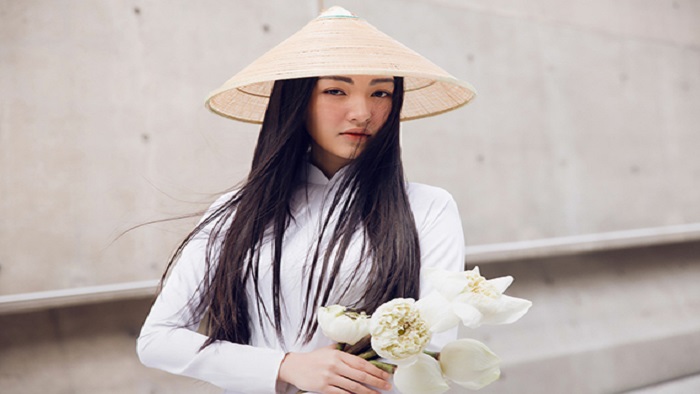 The beautiful symbolic image of the Vietnamese people (thanhnien.vn)

The formation and development of the conical hat industry in Hue lasts for hundreds of years with many famous conical hat crafting villages such as Da Le, Phu Cam, Doc So, Trieu Tay, Kim Long, and Sia, etc. Today, many famous ones such as Tay Ho (Phu Ho commune), My Lam (Phu My commune, Phu Vang district), Phu Cam, Phuoc Vinh, Doc So, Trieu Tay, Huong So, and Hue city have met the consumption demand of people and special souvenir demand for visitors coming to Hue as well.

Hue conical hat, especially the poem conical hat, is not just a hat but a true artwork. In order to have a high-quality hat, the artisans have to go through many meticulous steps, requiring the diligence and skill from picking the frame, covering with the leaves, cutting patterns to polishing the hat to preserve. Perhaps because of its sophistication and popularity, Hue conical hat is favored by many visitors, becoming one of the symbols in a Vietnam tour. 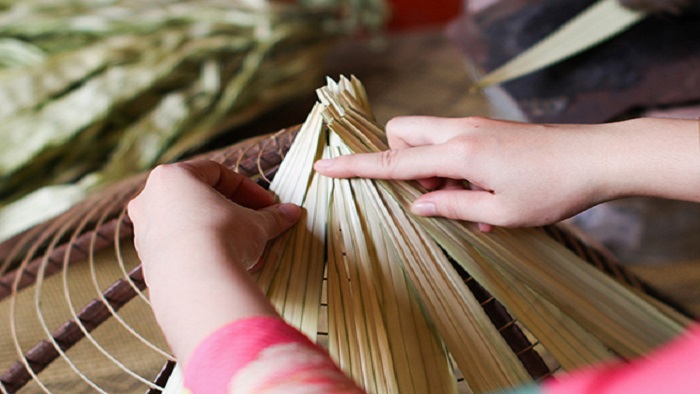 Making a conical hat requires both the meticulousness and love

Making the frame is the first step to determine the shape, roundness, and size of the hat. The hat frame is made of light-weight wood, having curved roofs of various sizes. Usually, a conical hat frame can be used for a dozen years if there is no change in design to meet the market demand. The rim is made of the trunk of the bambusa procera trees which are abundant in Hue. Each conical hat has about 15-16 rims which are like "16 full moon seasons" as people usually say.

The leaves to make conical hats in Hue are also the normal leaves like those in other regions, but they are selected through a variety of steps including steaming, drying, frosting, and flattening. Therefore, the leaves can keep the color of white green. In the stage of covering the frame with the leaves, people set patterns and symbols between the two layers of the leaves to balance in the space of the hat, so that when the sunlight illuminates from above, the symbolic pattern appears clearly.

There is a special kind of conical hat - poem conical hat, which has created the brand name for the dreaming city.

The poem conical hats were born in Tay Ho village as a coincidence. Around 1959-1960, Bui Quang Bac, a conical artisan and also a poetic lover in the village, had an idea of making poem conical hats by inserting the poems between the two leaves to honor the beauty of the hat. These famous poems were written about Hue. They are cut with shiny papers in all colors which are outstanding on the white green background of the palm-leaf conical hats. Furthermore, there are the hidden symbols in the poem conical hats which are often the images of Truong Tien bridge, Ngu Binh mountain, Ngo Mon gate, Phu Van Lau, and Thanh Toan tile bridge, etc.

Tourism is developing strongly in Hue, and the palm-leaf conical hat has become a souvenir with the unique culture of Hue favored by many tourists. The visitors even come to the conical villages to witness and participate in the process of making hats. They are really surprised and excited when the artisans save their the picture and name on the hat as a special souvenir. 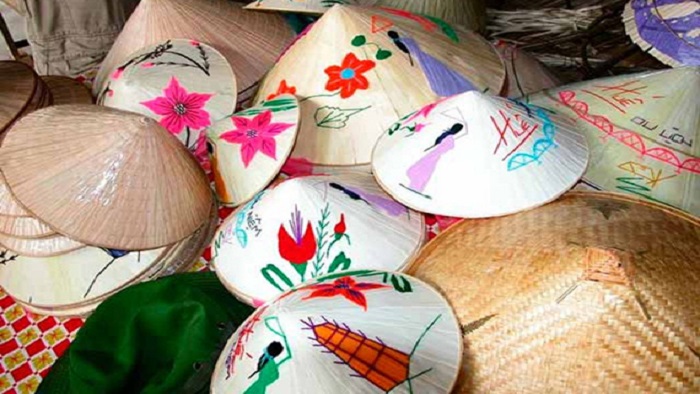 From Tay Ho, Da Le, Phu Cam, Doc So to Trieu Tay village, the poem conical hats radiate all the streets and become familiar, closer to the daily life of every woman in Hue. With simple materials of leaves and wood, the palm-leaf conical hats are still the "jewelry" of many girls. If you like the place, feel free to contact us for more information and don’t forget to like and share with others. Thank you.