Cu Chi tunnels is a historical site of Vietnam, this land used to praise as “the land of iron people” in Vietnam War because of the doughtiness of people here in front of the guns of the enemy. Nowadays, Cu Chi becomes an appealing attraction in Vietnam tours attracting a lot of tourists coming and exploring the brain of the Viet Cong and the unique tunnel system in the world.

History of Cu Chi tunnels in a nutshell

Located around 60 kilometers to the northwest of Ho Chi Minh City, the Cu Chi tunnel system is a matrix of underground tunnels stretching on a wide scale and with many layers. They were built during the time of 25 years from the very first digs in 1948 by the Viet Minh in the war against the French army. At that time, the tunnels were the main road connecting villages, and also the hidden place of the Vietnamese people evade French soldiers scouting the area.

During the American War, the tunnels were expanded over an area of 250 km and with its strategic position in the western gate of the capital of Saigon, it is considered playing an immense role in helping the Vietnamese troops win against the American insurgents. It was not only home to thousands of Viet Cong guerrillas, but also an underground village consisting of numerous trenches, bunkers, booby traps, bomb shelters, and an amazing air ventilation system. A small society under the ground was formed where people cooked, ate, slept, worked and even there were hospitals, theatres, schools in the tunnels when the conflicts happened on the ground. 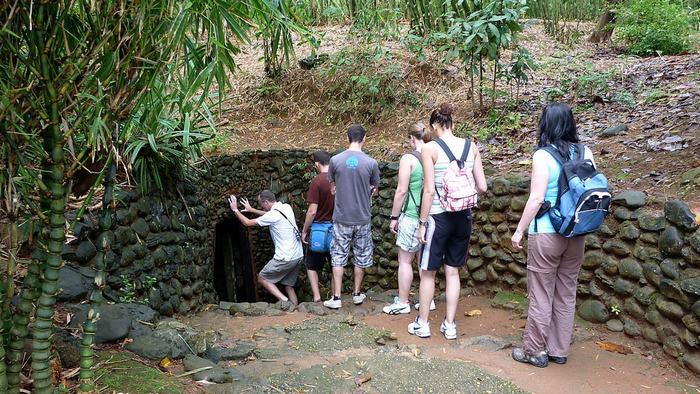 How to get to Cu Chi from Ho Chi Minh city

There are many ways to get to Cu Chi from Ho Chi Minh city, so you can choose to travel by motorbike, car, bus or speedboat.

By motorbike or car

It is very easy for you to rent a motorcycle or a car for the day to drive to the Cu Chi tunnels.

Going to the Cu Chi tunnels by motorbike is the best way we can recommend to you.  It takes around an hour and a half to go to the tunnels at Ben Dinh. The landscapes will change from the urban landscape to the rural view that blows your mind on the way.

Apart from taking a motorcycle or a car yourself, you can also take the public bus to the Cu Chi tunnels. You only need to catch two buses to get to Ben Duoc. First, take bus #13 from 23-9 park to Cu Chi bus station. Then transfer to Bus #79 headed to Ben Duoc. The total traveling time this way is roughly 2.5 hours and the price will be about 26,000VND (just over $1USD).

Make sure you go early in the morning so you have enough time to explore before the buses stop running for the day. Return bus #79 stops running at 5:30 pm and #13 at 9:00 pm. Please plan it well! 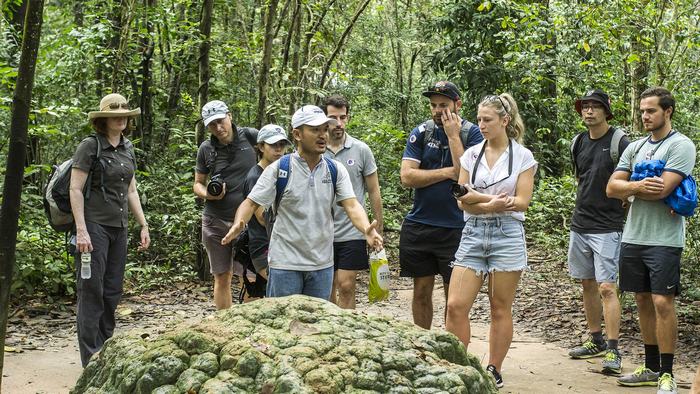 You can take a taxi to the Cu Chi tunnels too, but this will be super expensive. And a waste, cos you don’t get anything else out of it. Just comfort. You can expect to pay about $60USD both ways as it is a 120 km journey. You will save a lot of money by being adventurous.

What to explore in Cu Chi tunnels

When experiencing these two sites, you will feel the differences in the architecture and setup of Ben Dinh and Ben Duoc. The Ben Dinh entrance is around 50 km from Ho Chi Minh City, and it is wide enough for you to move easily.

In contrast to Ben Dinh, Ben Duoc is around 70km from Ho Chi Minh City. It is a recommendation for you if you have enough time because from here, you will be able to see the peaceful landscape of the countryside. 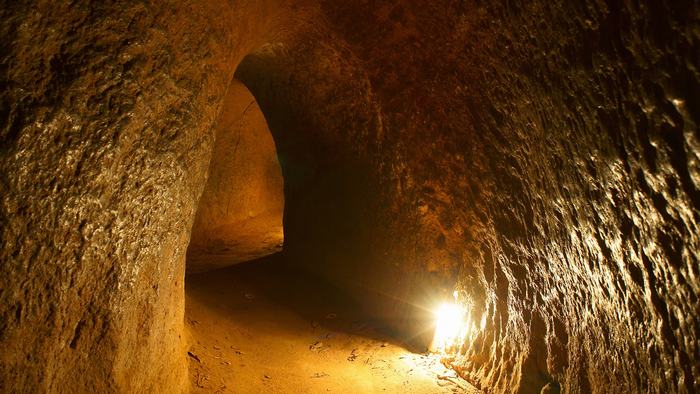 On your journey, you will hear the epic stories about Vietnam’s history and the life of Vietnamese soldiers in the hard days under the bullet rain of the guns of the enemy and the way they bravely hold the meter of land to fight against the enemy. You will also have an insight vision into the persistence and resourcefulness of the Vietnamese people when you have to crawl through the small tunnels for a long time and live with those conditions day by day.

What to do in Cu Chi tunnels

There are many interesting things you can experience in the Cu Chi Tunnels. Coming to Cu Chi, you will have time to explore the forest, underground tunnels, traps, watch documentaries, take photos, and of course, shoot a gun. You will turn into a Vietnamese soldier with Vietnamese army clothes and learn how to use the gun as well as join in the rehearsal when the enemy attracts suddenly in the tunnels. Then, you will feel clearly the iron spirit of Vietnamese soldiers to fight to protect the familiar things and lovers; it is such a meaningful experience that you never have in anywhere else.

Coming to Vietnam Laos Cambodia tours to know more about the historic sites in three countries. If you have any questions, let’s contact us to know more details. Thank you!