Located near the ancient capital of Luang Prabang, Laos, Kuang Si waterfall is one of the must-see destinations in the tours in Laos. This waterfall owns the best natural pool in the world and the breathtaking scenery that you surely will be surprised. It is such a real heaven on earth!

An overview of Kuang Si waterfall

Kuang Si waterfall is known as Tat Kuang Si waterfall, located 29 km from the south of Luang Prabang, Laos. It is a three-leveled waterfall which is a favorite site for tourists in the north of Laos. The height of the main waterfall is over 50 meters with the strong flow of water falling down a beautiful pool. In order to get to the waterfall, you have to go through a trail to the left of the waterfall. The water flows into a turquoise blue pool before going to the stream. 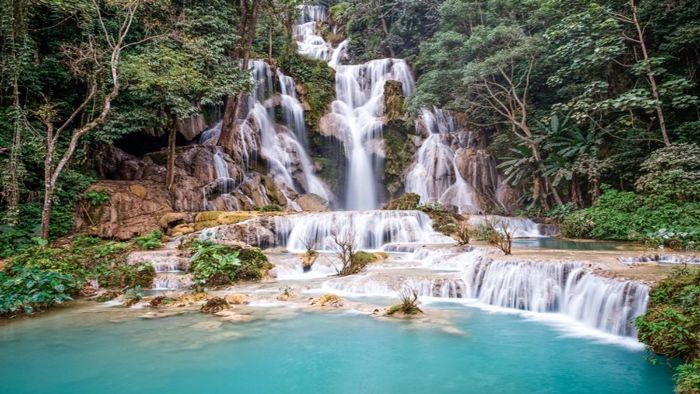 The best time to visit Kuang Si waterfall is from December to the beginning of May, It is the time when the rainy season ends and the cascading pools become tranquil and gentle again. During the months of the dry season, the flow of water over the limestone rocks becomes more slowly, you will see the traces of the water flow on the limestone and its beautiful turquoise color like you see in the photos. Of course, this is also the peak tourist season, so you should get there early to avoid the crowds.

Besides that, the rainy season in Laos starts from July to October, the heavy rains transform the waterfall from the calm, picturesque scene to the thundering angry face. Swimming is impossible, hiking is dangerous, and the only real advantage when coming there this season is the lack of crowds.

How to get Kuang Si waterfall

It is just about 23 km from the outside of Luang Prabang so there are several ways to get to Kuang Si waterfall from this city.

By shared tuk-tuk or private tuk-tuk

The shared tuk-tuk is also called “songtaew” in Laos, in fact, it is just the pick-up truck that has been customized with two rows of benches facing each other. It is the most common way to get to the waterfall.

It's very easy to find a tuk-tuk in Luang Prabang, though you have to need to find enough people for a ride which is about 6-7 people per ride. The price for a tuk-tuk ride is around 200,000 kip, which means under 50,000 kip per person.

Most of the time, the tuk-tuk fare will include a return trip and the waiting time at the waterfall. But it is a note to you when having a shared tuk-tuk tour, your group will need to agree on a set leaving time so that no one gets left behind!

If you want to arrange your schedule by yourself,  it is good to book a private “songtaew” for the day. You will have to pay about 180,000 - 200,000 kip or $22-25 for a private tuk-tuk within a day, and of course, the driver will wait for you at the waterfall to take you back into town.

By the public minivan or private minivan

Public minivan runs from Luang Prabang to Kuang Si waterfall each day, and it is the most economical way to get to the waterfall because you only need to pay for 60.000 kip. But the departure time is not stable and they often run slow to pick up the passengers along the way, so it is quite time-consuming for you to visit Kuang Si waterfall.

By bicycle or motorbike

This is an ideal option for those who are in search of a true adventure. The road to the waterfall is long, bumpy, and extremely dusty. So you have to make sure that you are a good driver and have a good physical health. It is very easy to rent a bicycle around town with a pretty cheap price for $2-3 within a day.

If you want to travel by motorbike, you also can rent a motorbike or a scooter in town to transport with the cost around $20 within a day.

This is the most romantic way to get to Kuang Si waterfall from Luang Prabang. You can take a slow boat riding along the Mekong river. It takes an hour in the river and crossing through the wild and rugged mountains, jungles and glimpses of peaceful and authentic local life, it surely impresses you so much.

What to do in Kuang Si waterfall

Swim in the turquoise pool

You will be blown your mind when facing with the beauty of this waterfall, it is so wonderful to take a dip in those cool turquoise blue pools. There are a few pools you can swim in the waterfall, but please let's be a respectful traveler and follow the signs saying "no swimming" in some areas because there are some sacred pools in the eyes of the local people.

There are the changing rooms near the picnic area. You have to make sure that you change into appropriate clothing again post-swim because Lao culture is quite conservative. 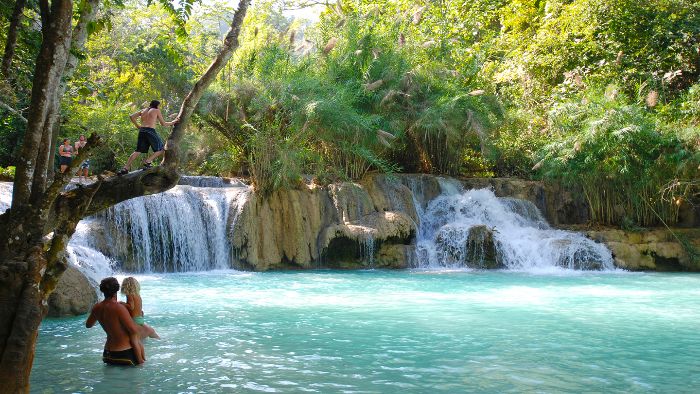 Hike to the top of the waterfall

If you miss hiking to the top of the waterfall, it means you miss the chance to see the best epic view of Kuang Si.

Following the trail to the left of the wooden bridge and you will step in the almost-hidden steps leading the way to the top. It will take about 15 minutes for hiking, and you'll feel the trail a little tricky. It has no railing and water flowing over it. But it is totally worth seeing the magnificent views. If you come on a clear day, you will feel yourself like looking right out over the breathtaking Lao countryside. There's nothing except the peaceful trickle of flowing water, a couple of small pools to take a cool dip in, beautiful forest in your vision.

There is a spot near Kuang Si waterfall, and you will have an unexpected trip to the Tat Kuang Si Bear Rescue Centre. In the beginning, this center looks like a rudimentary zoo more than a sanctuary. The center is operated by Free the Bears and is home to more than 20 Asiatic Black Bears that have been rescued from an array of dire circumstances. 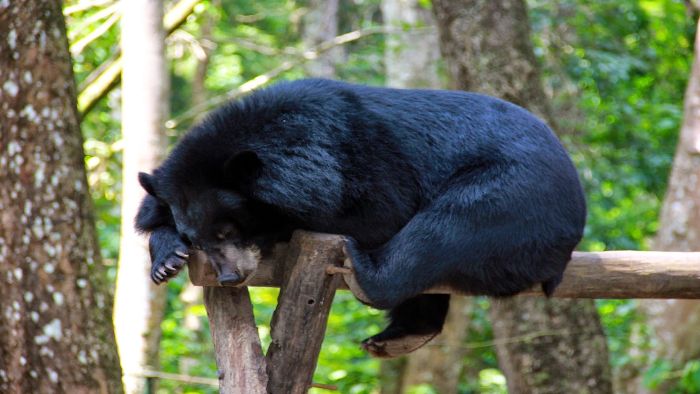 Coming to the package tours in Asia, you will have the chances to explore the new things in this beloved country, Laos. If this information is useful for you, share with others to know more about Lao destinations. Best trip for you!