Discover Wat Xieng Thong - the most ancient temple in Laos

As an area of pilgrimage for crowds of people and tourists when making Laos travel tours, Xieng Thong temple is playing an important role in the spiritual life, becoming a place of tranquility in the middle of the prosperous and bustling city.

A temple of historical value

Laos, which is a mountainous country and totally unconnected with the sea, always brings a sense of ability going back to time to anyone who visits to the region. While most Southeast Asian countries are transforming themselves and rising to international integration, visitors can still feel a peaceful and calm feeling in Laos.

Xieng Thong temple, or Wat Xieng Thong in Laotian, was built in Golden city during the reign of King Setthathirat in 1560. While many other temples were destroyed during the Luang Prabang kingdom battle and the black chessman army in 1887 - a rebellious armed group, Wat Xieng Thong was one of the two ancient temples not suffering from the destruction of the war. For now, it still retains the inherent original architecture and that is why this temple becomes sacred to the people here. 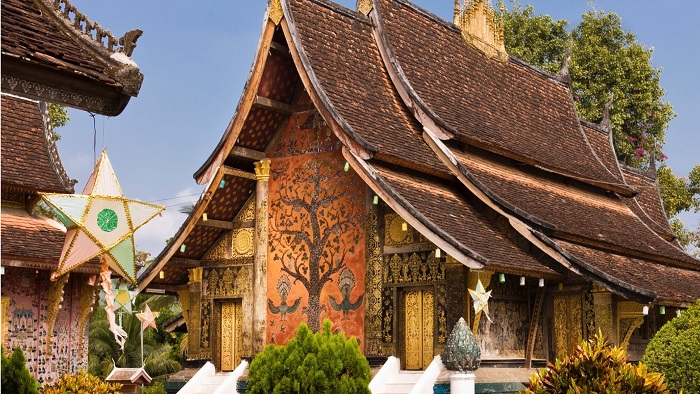 The temple is located at the end of Sakkarin road, near the confluence of the Mekong river and Nam Khan river, which is considered the most important pagoda in Luang Prabang. Looked on the map, the Nam Khan is as a stubborn child, trying to run parallel Mekong river to the east before entering the mother Mekong river, forming a peninsula which is Xieng Thong. Wat Xieng Thong is one of the oldest and most important temples of Luang Prabang city, Laos.

A temple of mystique architecture

Wat Xieng Thong has a large campus with many large and small items, including a sanctum of typical architectural style of ancient Luang Prabang with three curved roof layers laying down near the ground, surrounded by the small shrines of the similar architecture, forming a beautiful landscape in the temple. Outside of the sanctum, the old people built some small chapels combining architectural styles of the typical Laos ethnic and Theravada Buddhist. In the past, these chapels were used by the monk to meditate and study the dharma during the rainy retreat. 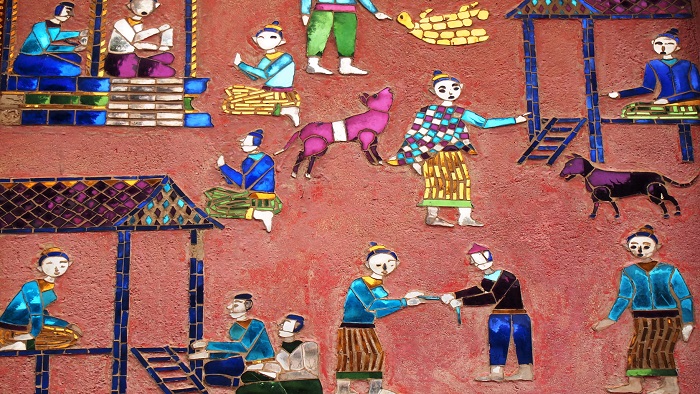 The colorful paintings in the walls of the temple

Besides the unique architecture of centuries, Wat Xieng Thong also surprised many people with a series of colorful paintings on the history of Buddhism and nation. All pieces of porcelain were carefully selected by the painters, matched or painted directly on the walls of the temple. These are considered the most unique art pieces in the Land of a million Elephants. It is also the storage of the famous lying Buddha statue, which used to be saved in the Paris museum and then taken to Vientiane and finally in the temple of Luang Prabang in 1964.

From the entrance of the temple, visitors can easily see a small temple in the left, in which there is a carriage of the old royal family. This carriage was used by Sisavong king in 1960, which is very big and outstanding with the sparkling decoration of gold and an image of 5 Naga snake goddess.

The interior of the temple is a system of sophisticated bas-relief and sculpture based on the Buddha. The surrounding streets also have numerous gorgeous reliefs.

A temple of religious festivals 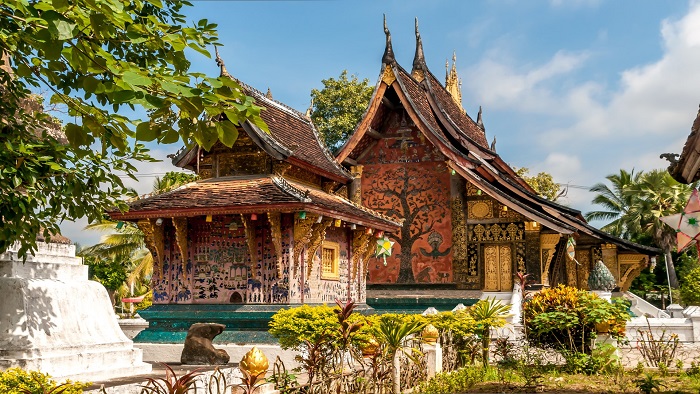 A sacred place for both domestic and foreign visitors on holidays (cazloyd.com)

After more than 1,500 years of existence along the history of the nation, Buddhism with the spirit of tolerance has gradually penetrated and become an indispensable part of the development of the Laos people. Up to now, the most obvious hallmark of Buddhism are the traditional temples which are visible everywhere in this country.

Every year, in the New Year Festival, people from all around the region usually pilgrimage to Laos. All the Laos Buddhist dignitaries as well as Luang Prabang government converge on Xieng Thong temple to pick the Prabang statue up from the museum monastery to the yard of Wat Xieng Thong and bathe the Buddha Prabang statue with frangipani water all day long to express their devotion to Buddhism.In other main festivals or holidays of the year, the Xieng Thong temple also becomes busier and more bustling than ever.

With the unique architecture and the sacred, mystical features, Wat Xieng Thong has been increasingly known, attracting many tourists to visit. They come here simply to see the beautiful scenery or to pray for peace, happiness for themselves, families, and other beloved people. If you have tours to Asia, don’t forget to pay a visit to this ancient yet interesting temple of Laos. Thank you.