Vietnam is an agricultural country belonging to the tropical region. In addition, the territory of Vietnam is divided into three distinct regions: North, Central, and South. The elements such as geography, culture, people, and climate define the specific characteristics of regional cuisine. Every region has a typical taste which contributes to the abundant and diverse Vietnamese cuisine. Among them, Pho (Rice noodle soup) is considered the best Vietnamese cuisine that any tourist also wants to enjoy on the Vietnam package tours.

About Pho or rice noodle soup

Noodle soup is a traditional Vietnamese dish, also considered one of the most typical dishes for Vietnamese cuisine. The main ingredient of noodle soup is rice noodles and broth along with sliced beef or chicken. In addition, rice noodle soup is served with some spices such as pepper, lemon, fish sauce, chili. These spices are added depending on the taste of each user.

Vietnamese Pho is usually used for breakfast or dinner. In the southern provinces of Vietnam, Pho is served with herbs such as onions, bean sprouts, mint leaves, and coriander. Pho Vietnam is usually rice noodle soup with beef, chicken noodle soup, noodle soup with pork or shrimp noodle soup. The broth is generally made with beef bones and spices including cinnamon, anise, ginger, cardamom, cloves, coriander, etc. Noodle is made from rice flour, thinned and then cut into small fibers. To get a bowl of delicious Vietnamese Pho, it depends on the experience and traditional secrets of cooking noodle soup. 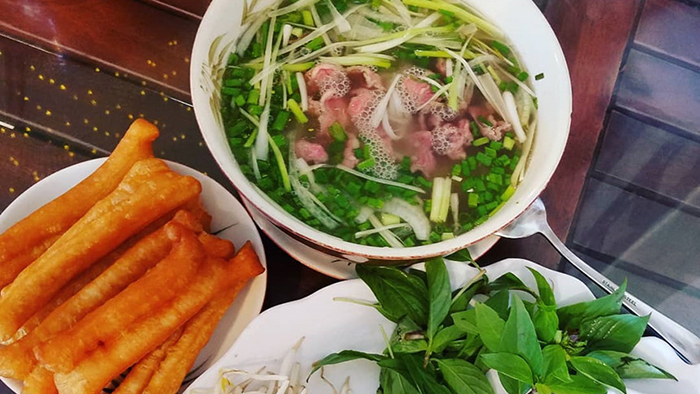 Rice noodle soup with beef - the must-try specialty in Vietnam

The origin and difference

Some theories say that Pho Vietnam first appeared in Nam Dinh, but Hanoi is the place that made this dish become famous as today. Some other hypothesizes consider that Pho as a culinary characteristic of Hanoi. Rice noodle soup originated in North Vietnam, then was expanded to Central and Southern Vietnam in the mid-1950s, after the defeat of the French in Indochina leading Vietnam to be divided into two regions. The northern Vietnamese migrated to the South in 1954 carrying Pho and Pho began to have differences.

Today, Vietnamese Pho has different processing methods and flavors. In Vietnam, there are different names to distinguish them such as North Pho (Pho in the North), Hue Pho (Pho in the Central) and Saigon Pho (Pho in the South). Normally, northern Pho is characterized by salty taste and the southern flavor of Pho is sweet. Rice noodle in the south is smaller than it in the north. Previously, there is only noodle soup with well-done beef. Later, there are both noodle soup with eye round steak and chicken noodle soup. In addition, there are also some dishes made from traditional noodle such as rolled noodles, fried noodles, etc.

In Hanoi, Pho has long been a special dish. Pho or rice noodle soup is enjoyed as a light lunch or dinner and is not served with other food. Rice noodle soup is made from simmering beef bones including shank or ribs. Meat for noodle soup can be beef or chicken. Rice noodle must be thin and soft, the spice of Pho consists of green onions, pepper, chili vinegar, slices of lemon. The famous Pho restaurants throughout three generations in Hanoi are Phu Xuan Pho in Hang Da street, Phu Thuong, Tay Ho, Bac Nam Pho in Hai Ba Trung Street and Nam Ngu Pho, etc. 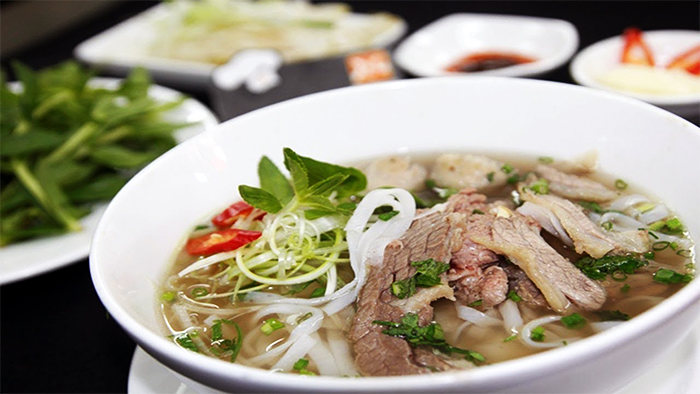 Beef noodle soup is a popular dish of Nam Dinh with the same characteristics as the Pho of other regions such as rice noodle, beef broth, beef or chicken and some spices. However, Nam Dinh rice noodle brings a difference other that cannot be confused. Nam Dinh noodles are a special type of small, soft and delicious fibers. Beef is sliced and dipped in the hot broth in the right time so this beef is soft and still retains the freshness and nutrition of beef. The way to prepare the beef broth is kept as a secret by the cooks here and they only passed to the next generation in their family.

In South Vietnam, especially in Saigon, beef in noodle soup is usually made in five types such as well-done, steak, flank, tendon, and tripe depending on the taste of the guests. In addition, there is also a bowl of fatty water of beef bones for you if you want. Pho in the South is usually served with sweet soy sauce, red chili and lemon, coriander, bean sprouts, and onion.

They are put in a separate plate accompanied to rice noodle with beef. Later, many restaurants also add to this plate some other herbs. The broth of noodle soup is not added monosodium glutamate and clear like Pho in Hanoi, sometimes sweeter, more fat and cooked with the chicken bone, grilled onions, and baked ginger. 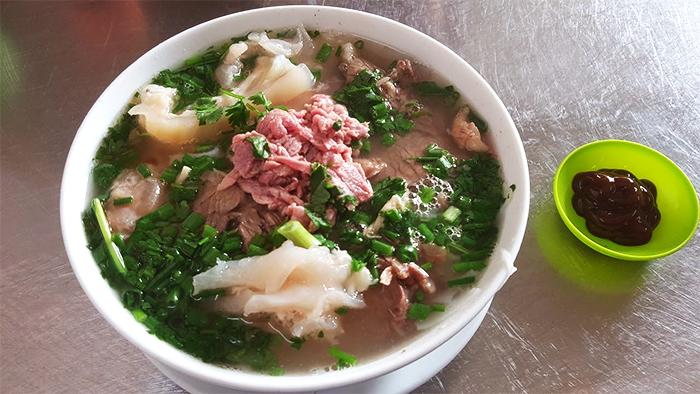 It is undeniable that Pho or rice noodle soup made a strong impression on anyone who enjoyed this best specialty. If you have never eaten Pho, why don’t you take a Vietnam tour and enjoy Pho? Do not wait. Share this article if it is useful for you. Have a nice trip!