Have you ever thought that there is a desert in Vietnam? Yes, many people are surprised when visiting Mui Ne, Phan Thiet because apart from the beautiful beach, there is the biggest sand dune in Vietnam spanning on a wide scale. So, let’s follow us to explore all the interesting things in this new attraction of Mui Ne.

Stretching over 25 kilometers from the center of Mui Ne, the sand dunes here are like a miniature model of Sahara desert. In order to get to Mui Ne sand dunes, a scooter ride to travel is such an ideal choice because the landscape along the road is so breathtaking and it surely gives you the thrilling feeling to your trip. Driving on the road with two sides which cover the white color of the sand is such an unexpectable memory of your Vietnam package tour. Your vision is nothing but sand, and the wind is strong enough to swirl the sand in your body. Right, you are lost in the kingdom of sand. When standing between the sand dunes, the extraordinary sand dunes by the waters and grasslands further give you a spectacle like no other. Chase your shadows. Run barefoot. Gaze at the fine white sand. Built a castle by the beach. Simply relax!

Standing on the coast, you will see the vivid picturesque fishing boats wandering gently in the sea. Those beautiful boats are of the local people in the fishing village. The sea in Mui Ne region is one of the main fishing zones of Vietnam where tons of fish concentrate and swim through. It is right if you go to the beach in the early morning, you will have a chance to see the vivid life of local people, it is time the fishing boats coming back the coast with the fish full in the cabin, a market opens right on the beach. This is heaven for seafood lovers. 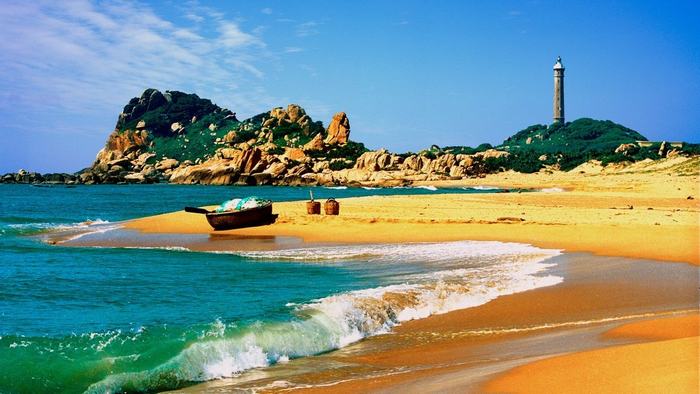 Mui Ne beach runs along the coastal road of Mui Ne town in Binh Thuan province. It stretches 15 kilometers with the smooth sandy beaches where you can go swimming and play around with gentle waves, or stay relaxing in the luxury resorts near the beach. The north of Mui Ne beach is home to a fishing village while the recreational activities such as swimming and water sports are located in the south. The activity people love doing most in Mui Ne beach is kitesurfing. The best time to enjoy this activity is from November of this year to March of the following year; it is the dry season in the region when it is sunny, windy and rarely rainy.

The Po Shanu Cham Towers is a group of towers including three ancient worship towers dedicated to Hindu gods: Lord Shiva, Agni, and Nandi. According to the researchers, the group of towers was constructed under the Champa Kingdom era, passing through the destruction of wars and time, the structure now is just the ruins that you can see at the top of Ong Hoang hill. From the mountain, you’ll get expansive views of Phan Thiet and the distant coastline. Po Shanu Cham Towers are a 15-minute drive from the center of Mui Ne town, and the entrance fee is 10,000 VND per person.

Van Thuy Tu Temple was constructed in 1762; this is the largest and oldest whale temple in Phan Thiet – Mui Ne. This is where the local people come to honor and give the gratitude of Ca Ong (Lord Whale) because they believe that whales are the ocean gods who protect fisherman from tropical storms and the dangers at sea. Therefore, Van Thuy Tu temple is considered a small museum saving the skeletal remains of over 100 whales, including a 22-meter long whale skeleton that’s considered the biggest in Southeast Asia. There are numerous artifacts dating back to Nguyen Dynasty displayed in the main hall of the temple; they are the valuable items that are protected so strictly such as written decrees, terracotta statues, incense table, lacquered boards, and an antique bronze bell. 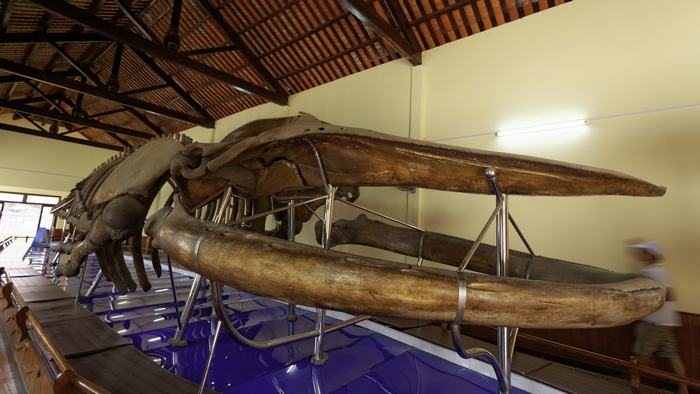 Ta Cu mountain is a large area covering 250,000 square meters of lush rainforests, limestone caves, and pagoda. It takes an hour drive from the center of Mui Ne town; To go to the top of the mountain, you have to go through a two-hour hike in the jungle. Recently years, there is a cable car route transporting you to the top; it just takes 20 minutes to get the peak of Ta Cu mountain. Sitting in the cable car, you’ll have a chance to see the breathtaking views of Thuan Nam town, Ham Thuan An sea, and Ke Ga lighthouse. On the top of Ta Cu mountain is Linh Son Truong Tho pagoda, this is an old pagoda built in 1879 under the Nguyen dynasty. In the pagoda's area, there is a 49-meter long statue of a reclining Buddha, which is considered the biggest one in Vietnam. It is the brightest highlight of the journey to Ta Cu mountain.

Why don’t you stand up and hit the road to Mui Ne night now? There are so many interesting things here waiting for you. If you have any questions, feel free to contact us at Southeast Asia package tours. Thank you and have a nice day!