Ho Chi Minh City is often known as a vibrant city with a lot of tall buildings and diverse culture. Coming here, you have plenty of choices for things to do or best places to visit. Besides that, Ho Chi Minh City also has another corner with hidden historical values. 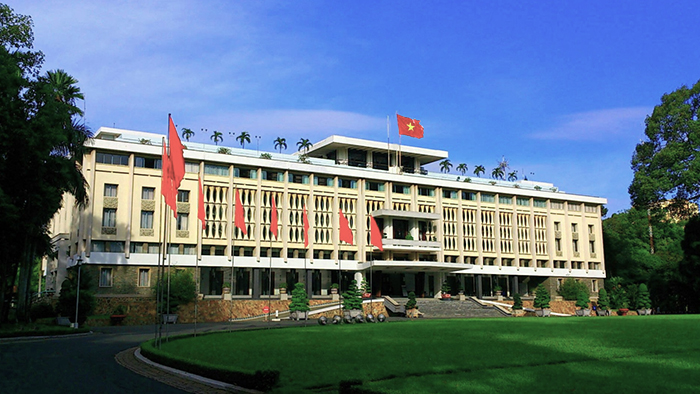 The Independence Palace (Reunification Palace) is a symbol of victory, peace and territorial integrity of Vietnam. Thanks to its historical significance, the palace is one of the most attractive destinations in Ho Chi Minh City. The campus of the palace is home to many ancient trees with different species from the French colonial period.

This place is also a favorite spot for those who are interested in art and architecture. Interior and exterior architectural details are arranged reasonably through the eyes of talented architects. The front of the palace is an oval lawn with a diameter of 102 meters. The green lawns create a sense of calm and refreshing for tourists when walking through the entrance. Coming there, tourists have the opportunity to see many historical relics in the war. The Independence Palace was opened at the end of 1966 and ranked as the special national relic.

The Notre Dame Cathedral is one of the most unique buildings in Saigon that attracts a lot of international and domestic tourists. The cathedral has a circumference of 91 m x 35.5 m and a height of 21 meters. There is no enclosure around. The foundation of the church was specially designed which can withstand loads of 10 times the weight of the entire church. 25 multi-colored glass windows combine beautifully. The chancel can accommodate 1,200 people. 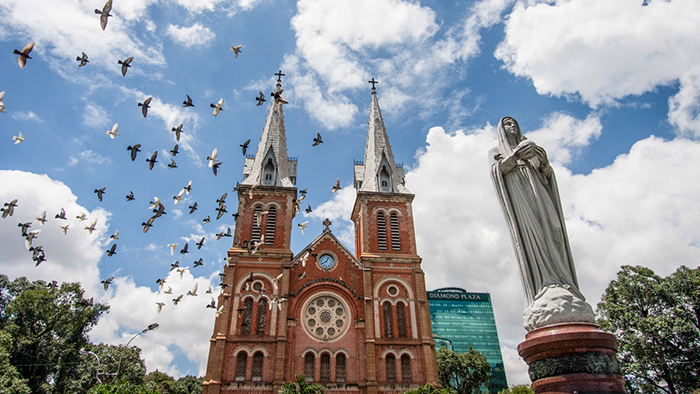 Two bell towers were built in 1895 with a height of 57 meters. In 1920, two crosses were placed on each side of the bell tower. The bell tower had 6 bells weighing a total of 25,850 kilograms, the largest one of the Far East at that time. There is a park in front of the cathedral. In the middle of the park is the statue of the Lady of Peace. The statue was carved in Italy and moves to Saigon in 1959 by waterway. The statue is 4.6 meters high and 5.8 tons weigh by the white marble.

This is a truly great architectural work, a living proof of a historical period of Vietnam. Although the Notre Dame Cathedral has appeared for over a hundred years, it still exists as a living relic of the religious freedom of Vietnam.

The Museum of Vietnamese History located on Nguyen Binh Khiem Street, District 1 is one of the most valuable heritage in Asia. This is the place to preserve thousands of ancient artifacts which have deeply meaningful to the history of Vietnam. Built on August 23rd, 1979, the museum is the first museum in the South with the name Blanchard de la Brosse. 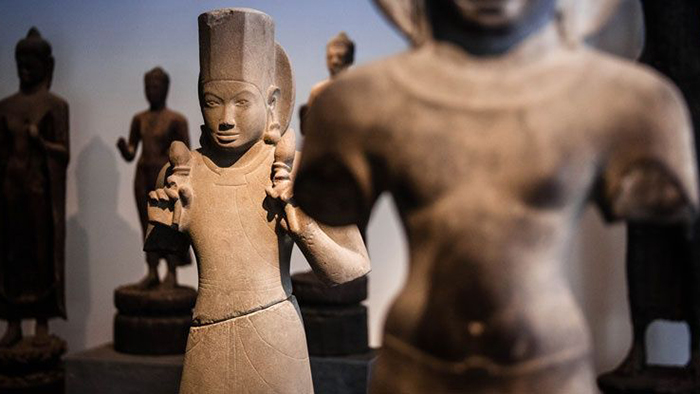 The relics inside The Museum of Vietnamese History

For many years, the Museum of Vietnamese History has been constantly expanding, adjusting and developing the fine art. Besides showing the history of Vietnam, the museum also features the cultural characteristics of neighbor countries.

Designed and built by the French architect Delaval, the Museum of Vietnamese History has a special architecture with octagonal blocks in the middle of the building, stylized decor with images of dragons and phoenixes. Later in 1970, the architect Nguyen Ba Lang built a row of U-shaped house in the back with views of the lakes.

Over time, the exhibited antiques changed rapidly. Initially, the museum owned 3000 antiques relating to Oc Eo culture. The museum made great efforts to collect the antiques. Up to now, the number is about 37,000. In addition, the museum also houses more than 25,00 precious books and materials on culture and ethnicity. All are valuable in the research of science. 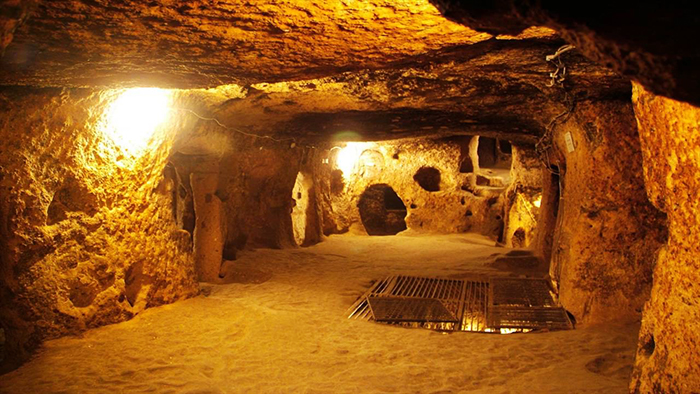 Situated about 70 kilometers to the Northwest of Ho Chi Minh city, Cu Chi Tunnels is a must-see destination for all tourists when coming there. Cu Chi Tunnels are a solid base of the Military Region Committee and the Sai Gon General Command contributing to the reunification of Vietnam. The relics now are preserved in two areas Ben Duoc and Ben Dinh. Belonged to the system, Ben Duoc was the base of the military zone, classified as a national monument in 1979.

This is a unique architecture with the deep underground road system containing many layers and nooks like spider web longer than 200 kilometers. The ways between the basements were arranged with secret tunnels. The design of the tunnels can only fit Vietnamese people because American soldiers are big. The system had full functional rooms such as command rooms, restrooms, and clinic.

Visitors are amazed at the sophistication of the system in Cu Chi tunnels. It was voted as one of the greatest man-made tunnels by the National Geographic channel.

Visiting historical sites is the best way to learn more about Vietnamese history. You can also get more information about other tourist attractions and things to do in Vietnam tours via our website. If you find this article interesting, share with others. Thank you!