Located in the south of Banteay Kdei and the Srah Srang baray, Cambodia, Prasat Kravan is an ancient temple with valuable historical and architectural beauty. This is a favorite destination of many tourists who love to explore in Cambodia travel tours as well as Asia tours. Let’s discover this interesting monument with us.

Prasat Kravan was built in 921AD following the Hindu temple style by a minister Mahendravarman under the reign of king Harshavarman. The minister dedicated this temple to Vishnu god. The temple was designed as a small brick one with five towers standing a row on a single foundation. Even though Prasat Kravan is a small temple, the interesting temple still attracts a number of both domestic and foreign travelers to visit because it’s the only one temple in Cambodia which has bas reliefs sculpted directly into the bricks while the other brick temples have carvings on the plaster covered the structure.

In the 1960s, Prasat Kravan was repaired by the EFEO (an organization of the restoration of the Angkor monuments and the development of Khmer studies), using as much as possible the original materials. The new stones with replaced the broken old ones are marked with a “CA” inscription. There is also a very similar temple named Prasat Neang Khmau that was found in Takeo province, Phnom Penh capital. In this temple, two brick towers of similar architecture were built around the same period as Prasat Kravan temple of Banteay Kdei. 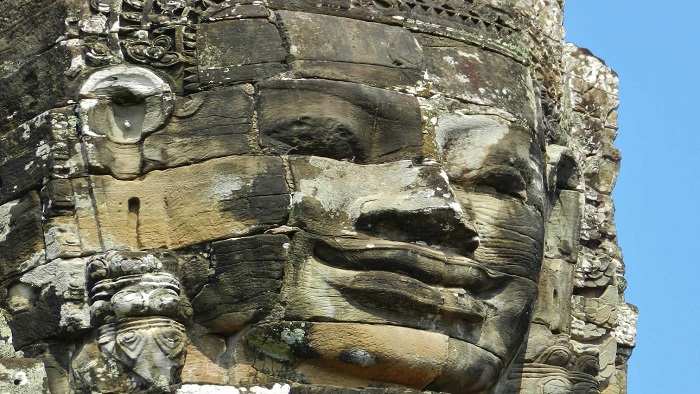 The monument is located a few kilometers east of Angkor Wat, dedicated to Vishnu, the Supreme God of Hinduism. The five sanctuary towers were arranged close to each other on a low foundation oriented towards the east. Prasat Kravan is one of the few Angkor temples that was built by high-ranking Hindu officials, not by a King.

As we can see in other popular Angkor Wat temples in Cambodia, the monument is surrounded by a moat, which is crossed by a small causeway in the western section of the temple grounds. The east of the towers is a large cruciform terrace, but for now, the location has been damaged that there is nothing left here.

The 5 towers were constructed in different sizes, of which the central tower is the largest and the others are lowered in size until the outer ones. In the interior of the central and northern tower, there is a number of sculptures carved directly into the bricks of the towers. These carvings are a unique feature in Angkor, which is also often found in the Cham temples of Vietnam.

In front of each of the sanctuary towers, there is a variety of lion statues guarding the entrance, some of which still remain. In the entrance door of the central tower, the sculpted Dvarapala guardian figures were placed in niches. An inscription on the door of the 3.5-meter-wide central tower states that the Vishnu statue was dedicated Prasat Kravan in 921. The central sanctuary is still the most attractive place with its original four tiers, followed by the Southern sanctuary.

Bas reliefs of the central sanctuary 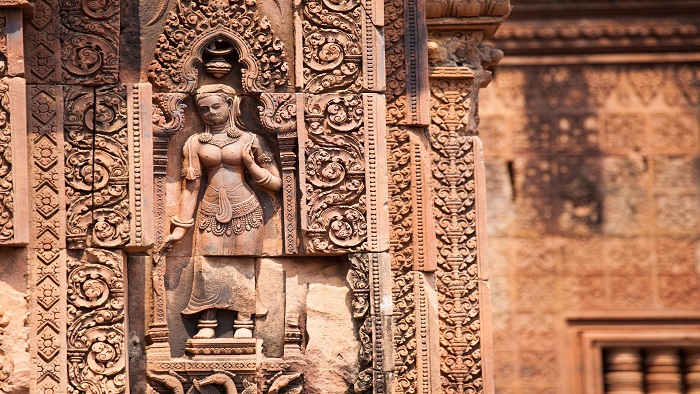 There are 3 bas reliefs in the interior of the central sanctuary that sculpts Vishnu god image directly into the brick walls, one of which depicts a story from the Bhagavata Purana, an ancient Hindu tale originating from India. The sculpture shows “the three giant steps of Vishnu”.

According to the tale, Vishnu came to earth and turned into the dwarf Vamana. Vishnu requested Bali, the King of the Asura demons, to give him a plot of land that fit three footsteps of him and the King accepted. After that, Vishnu immediately reveals his real size and powers and with three steps covers the entire universe.

On other reliefs, tourists can easily see an eight-armed Vishnu who is surrounded by a huge number of worshipers in both 6 lines, and Vishnu on his mount Garuda. The north tower shows sculptures of Lakshmi, Vishnu’s wife. This sanctuary contained a pedestal and was possibly dedicated to Lakshmi.

Tip: The reliefs in this tower are best viewed in the morning when the light from the east enters the door. The scene will be extremely stunning and sparkling. In contrast, in the afternoon, they are barely visible.

With the uniqueness in construction, the east-facing brick towers in Prasat Kravan temple have been one of the must-visit destinations in the great Angkor area, Cambodia. If this is useful for you, please like and share with others. Thank you.