Wat Traimit is an ideal destination for those who are interested in uncovering the hidden beauty of Bangkok via the most influential Buddha image. Despite a modest temple, Wat Traimit is a perfect place to view the magnificent splendor of the world’s biggest solid Gold Buddha image. Do not forget to take Asia Package Tour to get more information about tours in Vietnam. 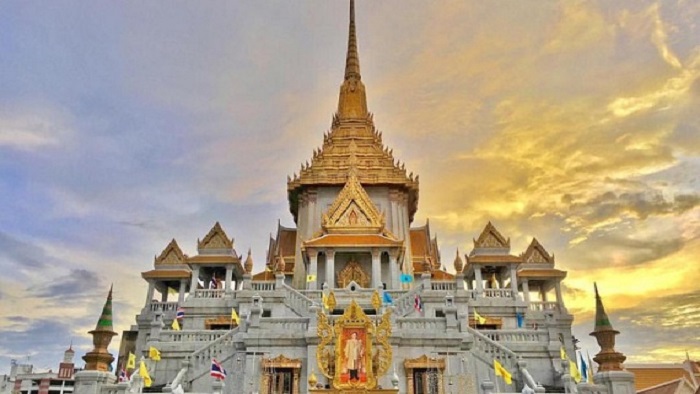 The biggest solid gold Buddha image across the globe

Located in the Chinatown area, the Wat Traimit temple is a royal temple which is famous for the massive gold Buddha image. The temple, which has the official name of Wat Traimit Withayaram Worawihan is also called “The Temple of the Golden Buddha”. It enshrines the enormous gold Buddha image named Phra Phuttha Maha Suwan Patimakon as well as displays the subduing Mara mudra statue.

For centuries, the true identity and value of this image were not known, until 1950 accident,  the image was discovered made of solid gold. The image is over three meters high, weighs around five and a half tons and it is predicted to be some 700 to 800 years old. Until now, it is the biggest solid gold Buddha image in the world. The origin of the Buddha image hasn't been exactly known. Based on its style, it is assumed that the image was cast during the Sukhothai reign. The Kingdom existed from 1238 to 1438 with the Northern Thailand city of Sukhothai.

After the tailspin of Sukhothai and the rise of the Ayutthaya Kingdom, the statue seemed to be moved to a temple in Ayutthaya which was destroyed in 1767 by Burmese invaders. At some point before that, the image was covered with a plaster layer to disguise it so it avoided from being stolen by the Burmese. After Ayutthaya was destroyed the image was most likely to remain in Ayutthaya, and its true origin and value was forgotten. 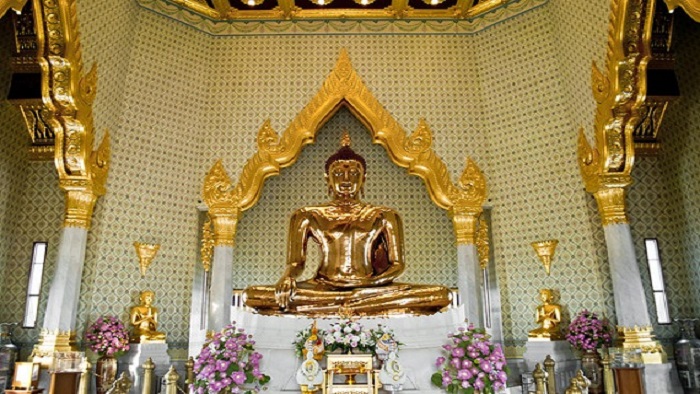 Inside Wat Traimit (via kitetravel.vn)

After Bangkok was established as the new capital by King Rama I, thousands of Buddha images were brought to the capital from the Northern regions, including Ayutthaya and Sukhothai, because there are still existing threats of the Burmese.

In the 1930s, finally, the Golden Buddha ended up in the Wat Traimit and it was still covered in plaster. In 1955 a viharn was set up to house the image. When the Golden Buddha was transferred to the new building by crane, a cable broke and the statue fell to the ground. The workmen run off due to fearing bad luck.

The next day, when a monk came back to the temple he found this image still in the mud. Some of the plaster coating broke, revealing the gold inside, thus ultimately revealing the true identity as well as value of the image.

In 2008, a 3-storey Phra Maha Mondop building was built to house the Golden Buddha image. The first floor features a museum where visitors can study the history of Chinatown as well as the Chinese immigrants in the capital while the second floor occupies an exhibition on the Golden Buddha history. Some of the coating revealed the image's true identity are on display here. At the top floor of the building, the Golden Buddha image lies.

How to get to the Wat Traimit

The Wat Traimit is situated on Thanon Mittraphap Thai-China, East of Thanon Yaowarat in Chinatown area. It can be easily recognized by the huge symbolic Chinese gate which marks the entrance to Chinatown in Bangkok. It could make a great start or end to a Chinatown discovery. This tour may be started from the Ratchawong Pier of the Chao Phraya River.

The easiest way to get there is by taxi or subway to Hualamphong station. From here, just walk around 300 meters to reach Wat Traimit. 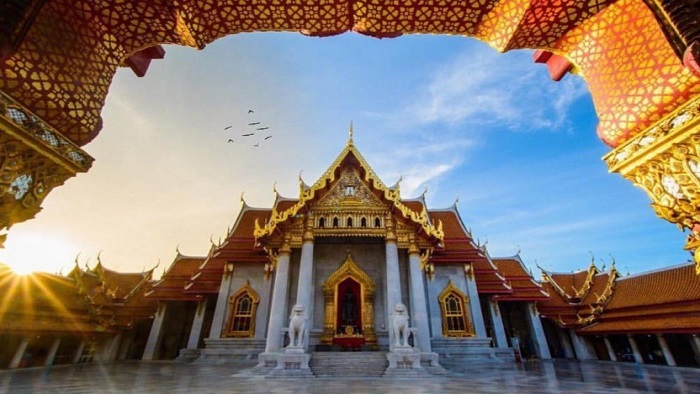 â–º The temple is open from 8 am to 5 pm, except on Mondays. Visitors must not pay the entrance fee to the temple complex but to view the Golden Buddha image, you must pay 40 Thai Baht, and the admission to the Chinese History Museum is 100 Baht for adults and 60 Baht for children.

â–º Respectful clothes is required. Wat Traimit is a typical Thai Buddhist temple, and the management insists that it's compulsory for visitors to dress appropriately. Men must wear long pants,  long-sleeved or short-sleeved shirts. Tank tops or sleeveless shirts are not allowed. Women must wear pants or skirts extending at least to the knee, and a top revealing bare shoulders is not permitted.

â–º You are highly recommended to wear shoes that can be easily removed since you need to remove them when entering any area in the complex.

Wat Traimit is not only the number one attraction of the Chinatown, it is home to the world's biggest seated golden Buddha. Thousands of people come here to say a prayer every day. The temple has a mystical aura, especially on special occasions.  Overall, it is truly well worth a visit to take a look at the golden Buddha.