Laos is one of the most tourist destinations in Asian tours packages If you have a chance to visit Laos, do not miss Wat Phou - a Khmer Hindu temple.

Where is Wat Phou located?

Wat Phou (Vat Phu) or mountain temple is a relic of a Khmer temple complex in southern Laos. Wat Phou is located at the foot of Phu Cao Mountain, Champasak Province, 6 km from the Mekong River, 670 km south of Vientiane. Surrounding this relic is the 4,000 large islands on the Mekong River called Siphandone (Siphan = 4,000, done = island). There are many ancient civilizations with sandstone castles and temples worshiping Theravada Buddhism. The people of Laos consider the Mekong River which flows through this area as a very potential sea area with nine mountains surrounding the old town.

This complex has a temple dating back to the 5th century, but surviving structures date from the 11th to the 13th century. The temple has a unique structure leading to a sanctuary. This place later became a center of worship of the Theravada that remains today.

According to historians, Wat Phou is the oldest temple in Laos, once the center of Hinduism worshiping Shiva. By the 13th century, Wat Phou became a shrine to Buddhism and has survived to this day. Wat Phou is one of the places to preserve the values of Laos history and culture. 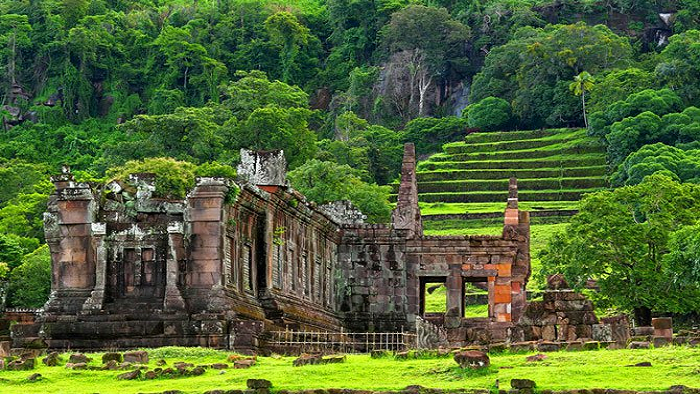 The legend of Wat Phou

Laos legend and history define Wat Phou as the temple of worshiping Badhecvara, built in the 5th and 7th centuries. It also has Crethapura rampart - the first capital of the Chan Lap kingdom. Archaeologists argued that there was a road connecting Wat Phou with Angkor about 100 kilometers away.

Originally, this is a mountain temple, later, when Buddhism became the national religion of the Elephant Kingdom, Wat Phou was restored and transformed into a Buddhist temple. Since the 11th century, the mountain with the sacred stream behind the temple is the center of worship and meditation of the monks. Annual sacrifice festivals are held at temples at the foot of the mountain.

The entrance to Wat Phou

According to the tradition, once a year, at night, the King Chan Lap passed through the rugged mountains, broke into the temple, where there are the guards, killed a person to sacrifice and pray for the country to be peace and prosperity. After that, Phia Kumantha, the creator of Wat Phou, continued to maintain the custom by personally killing a pair of white virgins to sacrifice the gods. Later, the festival of human sacrifice was replaced with buffalo sacrifices. Sacrifices at Wat Phou are also the rain festival of the local people.

Today, Wat Phou festival is a Buddhist festival of the whole of Southern Laos. This is one of the largest festivals in Laos held three consecutive days in the fifteenth of the third lunar month. People from all over Laos and neighboring provinces in northeastern Thailand pour here to take part in this festival. Vientiane Lake in front of the ancient temple is the center of the festival. There are boat racing, elephant racing, buffalo fighting, dance music and fireworks. Buddhism, Hinduism, and animistic ceremonies are also held here.

The architecture of Wat Phou 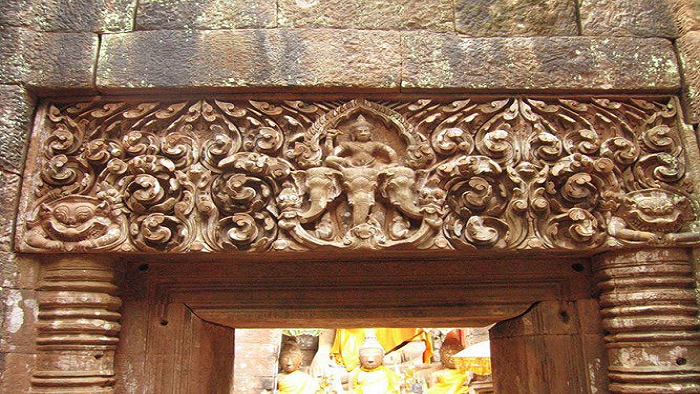 The architecture of Wat Phou

At the entrance to Wat Phou. there is a museum displaying more than 100 stone statues, carvings with the beautiful decoration on stones. These ancient artifacts dated from the 5th to the 11th century. The main gate and the front of the temple are now ruined but still marked by the reliefs engraving images of the gods of India. Taoism. Through the gate, visitors follow the wide road to the foot of the mountain where there is Linga stone pillar - the symbol of Shiva. The road is lined with flat rocks. At the end of the road, the two main temples facing the east are symmetrical on a high hill. Both temples are being restored. The buildings here are made of stone.

The upper temple is located in the middle of the mountain. The way to the temple is also paved by stones, the two sides have the stone columns standing up. The temple is a block of architecture arranged from large rocks, engraved sophisticated. Behind the temple is a cliff, on which the ancient craftsmen carved lively and large statues. 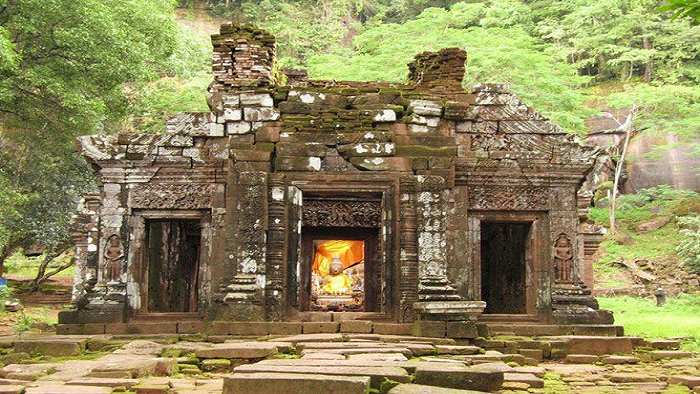 The upper temple in Wat Phou

In addition, Wat Phou remains a remnant of an ancient library. Historians say that this place is to keep the documents, books related to Hindu. There are also other sculptures in the northern part of the temple: Buddha footprints on the cliffs' face,  elephant-like stones, and a crocodile-like stone. In ancient Chinese records, it wrote Wat Phou temple was formerly persistent, took virgin blood to offer the god. This sacrifice festival is held annually. However, there is no artifact to prove this custom.

Over a thousand years of history, Wat Phou is still an attractive destination because of the magnificent beauty of its unique architecture. To know more information about the best tours in Laos, via our website. Share this article if it is useful for you. Have a great trip!