Being one of the world’s greatest architectural treasure, Phnom Bakheng used to appear in the 2001 film Tom Raider in the scene that Lara Croft first set foot on Cambodia. It’s not surprising that the filmmakers who have so much taste in art, chose this superb location. It’s such a good idea to come here to enjoy the spectacular view of the whole area of Angkor Wat, watch the sunset and contemplate the stunning architecture of stone blocks.

The hill of the god 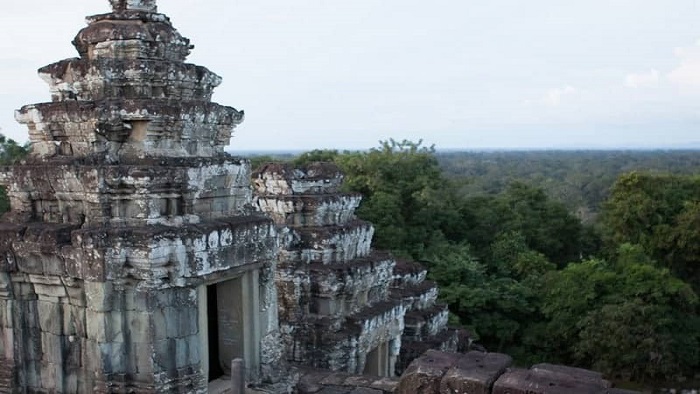 Phnom Bakheng which is the highest temple in the whole area of Angkor Wat was built on the 79-meter-tall Bakheng Hill between the late ninth and the early tenth century, two centuries before Angkor Wat.  After Yasovarman became the King in 889, the capital was moved to Tasoharapure, Northwest of Roluous. He decided to construct Phnom Bakheng as the first temple and his state temple at the heart of the new capital.

Naturally, the temple was carved from the existing rock on the hilltop. The stepped pyramid construction was created with the purpose of representing Mount Meru – the home of the Hindu gods. In a rectangle base, there are five tiers, each of them had 12 towers. The top of the temple has four towers at the main points of the compass as well as the central sanctuary. In the lower levels, there are 104 smaller towers that were placed symmetrically in a perfect way. The total numbers of the tower are 108 while in total there are seven levels. All of these figures are believed to have symbolic meanings.

The main center of the temple is said to represent the axis of the globe whereas the number of 108 towers mentions the four lunar periods, each period consists of 27 days; as a result; this is basically considered to be an astronomical calendar. The seven levels talk about the seven Hindu heavens. A large number of details and small towers were collapsed or eroded; however, some bas-reliefs are still preserved well and exist. The central temple was hemmed by brick walls that have ruined.

Standing on Phnom Bakheng, you take the chance to have a stunning view of the whole area of Angkor Wat. From this position, you can contemplate the other famous temples belonging to the complex of Angkor Wat and you can’t stop uttering “How majestic, mysterious and antique Angkor Wat is”. You feel like you are getting lost in an ancient kingdom that is totally isolated from your place. Once you have seen this gorgeous scenery, surely it’s always alive in your mind. In the sunny days, the scenery is more glorious when the stony blocks are covered by sunrays and become more remarkable. 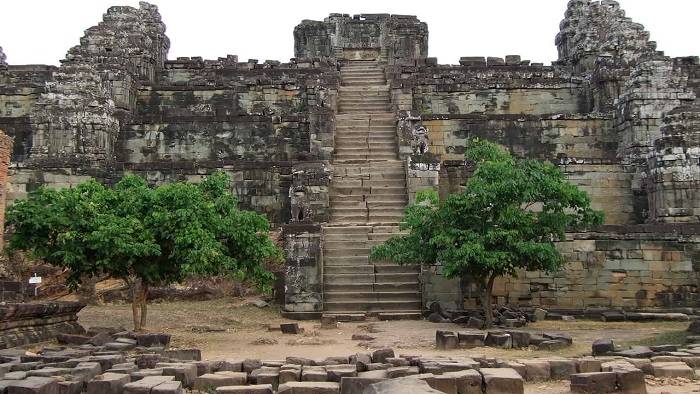 The best location to contemplate

It’s greatly faulty to arrive at Phnom Bakheng without enjoying the sunset. Actually, this seems to be the most important motivation of tourists when coming to Phnom Bakheng. Phnom Bakheng is the most solitary place in Angkor and you will be surely overwhelmed if you visit this in the sunset when its special charm is shown most clearly.

It’s strongly believed the sunset over the Western Baray is quite fantastic from here. The atmosphere at the summit is very still. The darkness is no longer intensive and you feel like you are standing in the rooftop of the world. Around you, the temples look like to be floating in the sky among the fluffy cloud. The dawn comes so silently and quickly that you don’t realize until the moment you are surprisingly aware that the sky is no longer dark and the bright sun comes up already.

It’s worth climbing to the top. Sometimes it may take efforts since the road near the summit is little narrow. However, in return, the reward is overpriced. It’s time that the breathtaking landscape is in front of your eyes and it will surely touch your heart and linger in your mind for a long time.

It’s advisable to come here in the early morning when it’s cool and not crowded yet; however, in the afternoon Phnom Bakheng has its own beauty. The god-like solitude remains but the melancholy of the early morning disappears and the scenery is much more splendor with a thousand shades of orange, amber, and gold. In the west, the waters look like a sheet of burnished copper that reflects the fiery light of the sun. 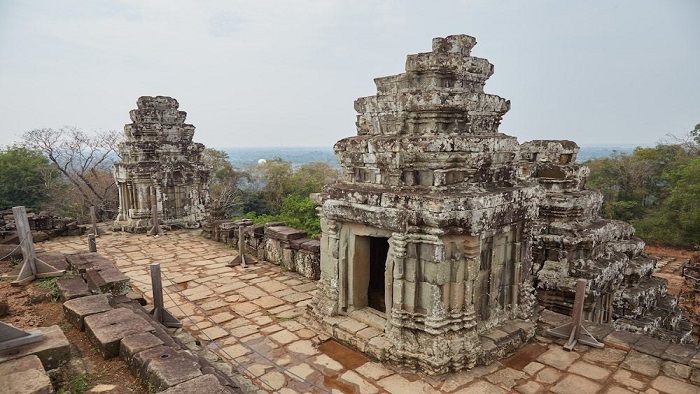 Once you visit Phnom Bakheng, it will surely leave a strong impression on you. Undoubtedly this magnificent establishment will blow your mind away.

“Why don’t you stand up and take package tour Cambodia right now? Do not forget to take luxury Cambodia tours to get more information about Phnom Bakheng as well as other Cambodia amazing destinations. Cambodia is waiting for you!  Share the post if you find it useful. Have a nice trip!