Hoa Lo prison which is a symbol of the Vietnamese revolutionary fight against the French colonists represents the iron will, profound patriotism, and myriad sacrifice for the country's independence of the Communists. If you like to learn more about Vietnam history during the French colonial period and the Vietnam War, visiting Hoa Lo prison market is a must.

Hoa Lo prison has also the name of Maison Centrale that means “the central house” in the French language. This shows the ambition of the French colonist administration that wanted to establish Hoa Lo prison as the most important and secured prison in Indochina. Because of being located in the area where used to be a pottery village prior to the prison establishment, the prison is also called “Hoa Lo” while “Hoa” means “fire” and “Lo” means “kiln” since the resident liked to keep the informal memory of the village. 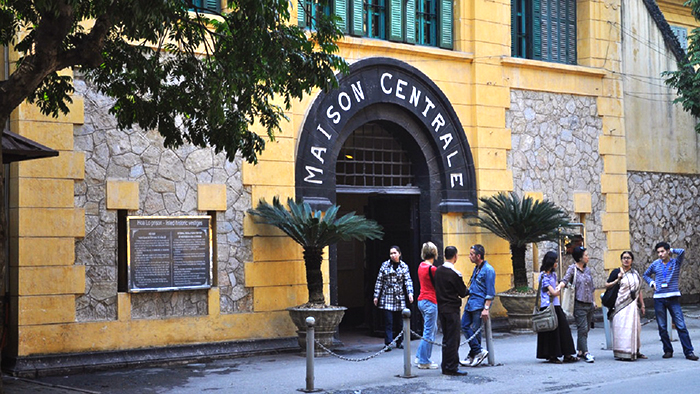 Being the most inhumane prison in Vietnam with the modernist equipment for the strictest punishment at that period, Hoa Lo prison was built from 1896 to 1899 and underwent a renovation in 1913. The French colonial wanted to make an illustration of what if someone dares to oppose the colonial government and fight for independence.

Hoa Lo prison which is built in the heart of the city is a great example. Being considered to be the central prison of the Central and Southern part in the country, the prison which initially used to confine the political prisoners was a part of the unfair and cruel Northern network of prisons which Cao Bang, Son La, Hai Phong, and Lai Chau were included.

The present Hoa Lo prison which you witness nowadays is actually the small southern section of the whole prison complex. Most of the complex was demolished to leave the space for Hanoi Tower (then Somerset Grand Hanoi). However, the southernmost corner has been still preserved as the memorial and tribute to the revolutionaries who lost their lives here due to the harsh condition. 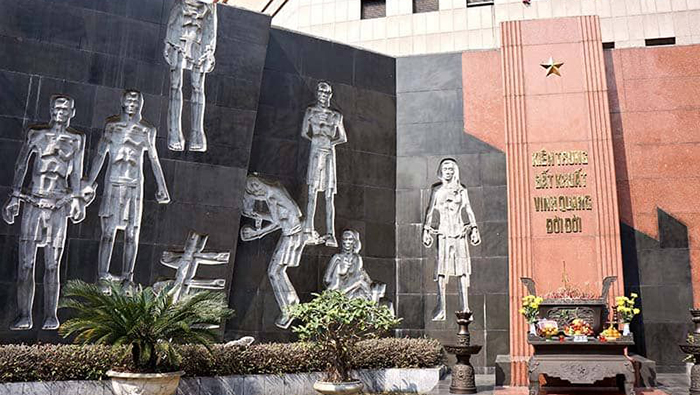 Although the architectural features of each chamber were various, the whole building follows an identical style with solid walls, tile roofs, and grey lacquered floors. The surrounding walls which are 4 meters in height and 0.5 meters in thickness were topped with several pieces of broken crystal and electric wire. All the materials and equipment to build the prison were imported from France to ensure the maximum level of security

However, ironically, Hoa Lo never becomes an effective prison since hundreds of people escaped through the walls and the sewer grates. In 1932, 7 prisoners pretended to be ill seriously and disappeared on the way of being taken to the clinic. In 1945, the prison break of over 100 patriotic prisoners took place while the political prisoners were mixed with other prisoners, exchanging the daily clothes from the visitors and got out freely.

In 1951, the most famous prison break happened when 17 prisoners under death sentence managed to escape from the sewer tube.

The hell of earth

Initially, the prison was made to hold only 450 prisoners but the realistic number of the prisoners was higher all the time. The prison was always in a crowded state. In 1913, the number was 615 prisoners while at the peak time of 1953, there were 2000 people imprisoned. Some detention chambers were so crowded that the weaker prisoners were taken out in order not to be suffocated. 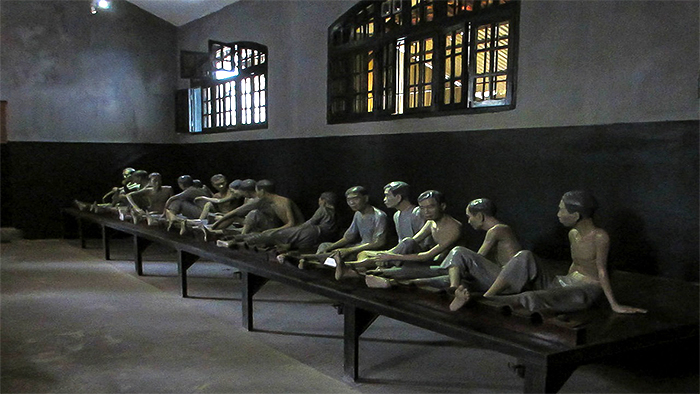 The detainment room in Hoa Lo prison (via flickr.com)

There were 25 to 30 prisoners living in the common room. They were bound most of the time and have to share one toilet. Being fettered one or two legs by a shank made of iron and wood depends on their attitude. Every day, the prisoners had 15 minutes to walk and take the bath. When bathing, they had to stand naked around the tank and pour down the water into them as fast as possible in front of the supervision of the guards and jailers.

Every day, they were fed two meals including the rotten rice that contained the maggot. Prisoners were pressured to do sanitation right in their room while the buckets containing the waste and excrement weren’t thrown away for days and weeks, causing the atmosphere inside the room to be polluted and horrified all the time.

Many of veterans who were detained in the prison described this place as the hell of the earth due to its ruthless hundred ways of torturing. For instance, the jailers used the electric shock engine to beat the prisoners at the head and heart or the colonists burned the prisoners by stuffing them with clothes soaked with gasoline.

Many of Vietnamese revolutionaries fought for a better condition of detainment with the expectation that they could be alive and get out of the prison one day. The prisoners also organized the hunger strike to struggle for the request to be treated fairly as the authentic political prisoners.

During the French colonist period, the prison’s inmates included many leaders of revolutionaries such as Phan Boi Chau, Hoang Trong Mau, Luong Van Can, Nguyen Quyen, Nguyen Luong Bang. Nguyen Van Cu, Le Duan, Truong Chinh, Nguyen Van Linh, and Do Muoi, all of who would become the General Secretaries of the Communist Party later, were detained here. 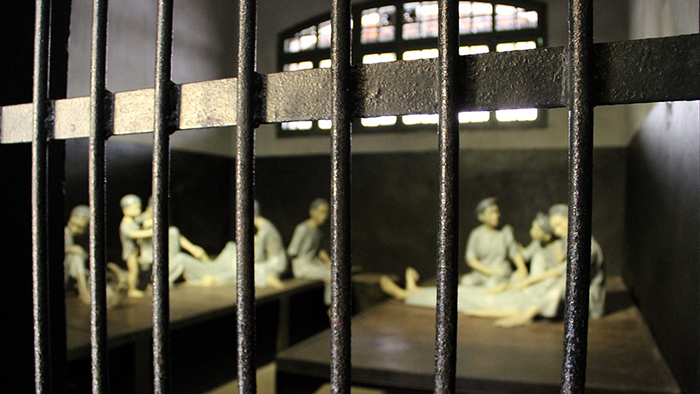 Between 1964 and 1973 the prisoners consisted of several captured American pilots, including Senator John McCain who was the American presidential candidate in 2008 and Douglas Peterson who became the first American Ambassador to the Socialist Republic of Vietnam. John McCain revealed about his time in Hoa Lo prison in his book Faith of My Fathers.

Hoa Lo prison tells us the sorrow but brave past of the Vietnamese country by reflecting the indomitable will and the great patriotism of the Communists. In case of arriving at Hanoi, you can’t pass this interesting destination.

Do not hesitate to discover Hoa Lo prison museum right now. Why don’t you take Vietnam package tours to get more information about the most beautiful places in Vietnam? Vietnam is waiting for you! Share the post if you find it useful. Have a nice trip!