My Son Sanctuary - the gathering place of religious beliefs in Vietnam

Discovering the tourist beauty My Son Sanctuary in Da Nang is one of the exciting journeys a lot of visitors love. With the mysterious ancient beauty, My Son Sanctuary annually welcomes thousands of domestic and foreign tourists to visit. My Son is an ancient temple vestige, which was recognized by UNESCO as a World Cultural Heritage in 1999. If you are planning to visit My Son in Da Nang, please follow the article below of Vietnam travel tours to get more needed information about the tourist destination.

My Son Sanctuary is one of the architectural works built in the 4th century. Through the development periods, this place has been expanded and built many large and small towers. Being well-known as the main relic of Champa cultural relics, My Son Sanctuary is the place which gives tourists the feeling of turning back time to the past. This place is a Hindu sacred place of the Champa Kingdom.

My Son is the only point of Champa art having the most continuous development from the 7th century to the 13th century. This is a special tourist destination of Da Nang, which visitors should pay a visit once.

Previously, according to the traditional rituals of each king after ascending the throne, they had to go to My Son to offer sacrifices and focus on building temples. In addition to the function of a ceremony, My Son Sanctuary was also the burial place of the powerful kings and monks. After the collapse of the Champa Kingdom, My Son Sanctuary had been forgotten for centuries. 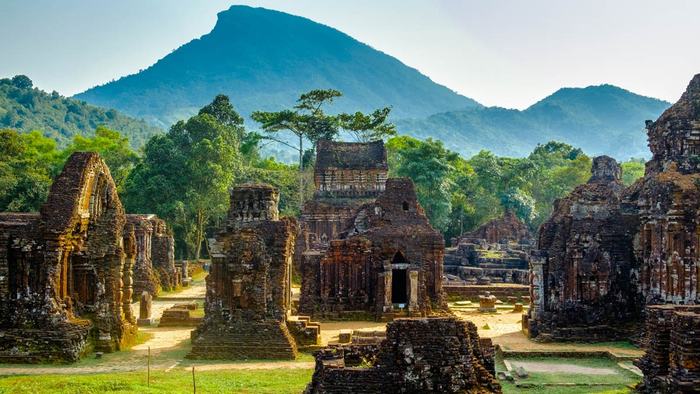 In 1885, it was discovered by a group of French soldiers. The archaeologist Camille Paris came here to learn about this monument ten years later. In 1994, the My Son Sanctuary attracted many researchers and archaeologists to explore the mysteries here.

To serve the protection of My Son Sanctuary relic, contributing to the development of Da Nang tourism, in 1995, the management board of My Son vestige was established. In two years 1998 and 1999, the records sent to UNESCO for recognizing My Son as a World Heritage Site were submitted.

In December 1999, the My Son relic was officially recognized as a World Cultural Heritage. My Son is evaluated with two standards. They are typical of cultural exchange and integration into the indigenous culture.

Geographical location of My Son Sanctuary

When coming here, tourists can ride a motorbike around to admire the beauty here. My Son Sanctuary is located in a large valley in Quang Nam province, surrounded by a lot of green mountains. There is a 100-400m mountain connecting Truong Son mountain range to My Son and Tra Kieu capital. With the majestic mountain terrain, tourists coming here will have a chance to not only visit works and temples but also enjoy the fresh air and the green nature here. 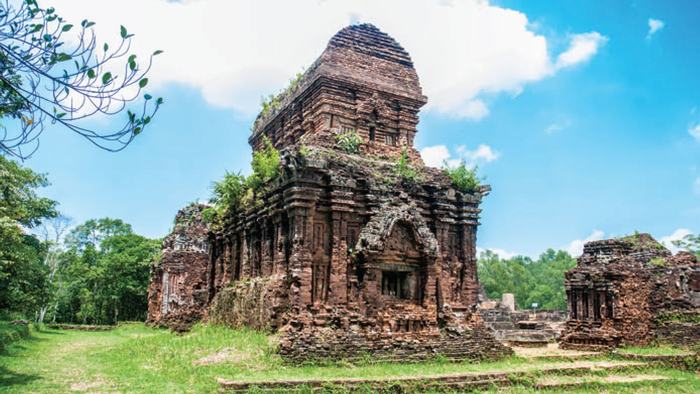 The architectural beauty of My Son Sanctuary

What makes tourists attracted best in the beauty of My Son Sanctuary, Danang is its architecture. According to the research results, the first temple in My Son Sanctuary was made of wood in the 4th century. It was then rebuilt with brick, with unique construction techniques and it has been still a mystery until today. Architecturally, the temples and tombs in My Son Sanctuary are the convergence of many different styles from ancient styles such as Hoa Lai, Dong Duong, My Son to Binh Dinh.

My Son Sanctuary consists of many tower clusters and each cluster has a main temple, surrounded by small towers and auxiliary buildings. Temples represent the center of all things and serve as the place of worship of God Siva. The front of each tower cluster is a gate, followed by the vestibule where there is the arrangement of offerings and traditional singing-ceremony. Going into the tower clusters, you will see a work which always turns to the north called Kosa Grha.

The towers in My Son Sanctuary have the shape of a pyramid. According to the ancient Cham people, this is the symbol of Mount Meru - the home of the Hindu gods. If tourists have ever been to Ba Na Hills in Danang, they will see the souvenirs simulated images of towers in My Son Sanctuary, which are made of stone uniquely. When visiting this place, in addition to admiring many towers with beautiful architecture, visitors also have the opportunity to learn the gods decorated with many impressive patterns. 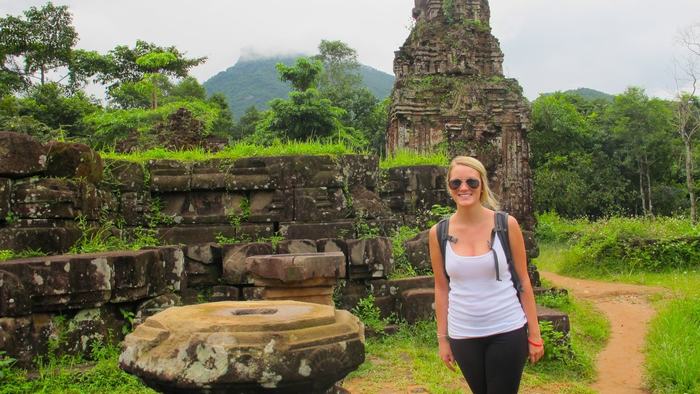 Coming to My Son Sanctuary, visitors can easily see decorative details such as flowers, elephants, lions, Kala - Makara, musicians, goddess of the sea, or Apsara dancer. This trip to My Son Sanctuary promises to give visitors a new real-world experience in architecture, religion, and knowledge of the previous history.

If you have a chance to visit My Son Sanctuary, do not forget to book Asia tours package to explore the beauty of My Son Sanctuary. Let us become your partner on the trip to My Son in the near future. Have a nice trip!