The Land of Temples is not only famous for its Angkor Wat populations, mysterious and ancient Angkor Thom, but also the ancient Kulen sacred sanctuary of the ancient Khmer people and legendaries revolving around it. The majestic waterfalls, architectural and sculptural works in Buddhist style, and sacred spring, etc have attracted many visitors to Kulen for pilgrimage.

Location and history of Kulen

As the country located near the equator, the most beautiful season of Cambodia starts from November to April. In this period, the weather in Siem Reap is cool, very ideal for visitors to pilgrimage and experience the beauty of Kulen Mountain National Park. 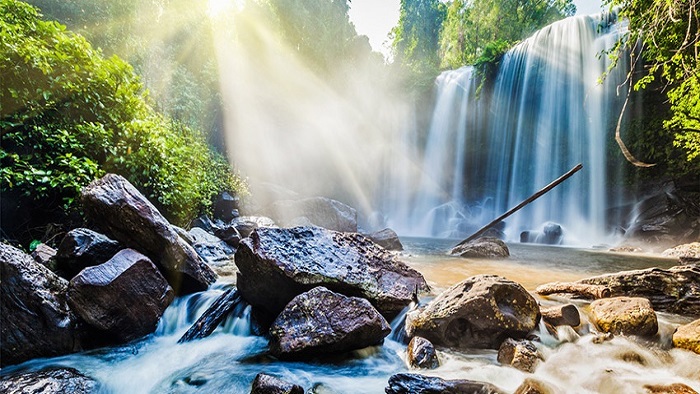 About 50 kilometers in the northeast of Siem Reap, the 300-meter-high Kulen mountains have become a sacred place in the heart of Cambodian people. Also called Mahendraparvata mountain, Kulen is a cultural and historical destination that marks the origin of the Khmer empire in the 9th century when King Jayavarman II declared the country’s independence from Java and stated himself "Chakravartin", which means the king of a particular country.

After that, King Jayavarman II chose Kulen as the first capital of the Khmer empire, beginning the glorious Angkor era. Stretching over 13 kilometers towards the Angkor Delta, Phnom Kulen is home to a wide range of temple relics and centuries-old carvings as well as art sculptures. Moreover, since most of the areas in Phnom Kulen are still intact, this is indeed a treasure of ancient relics, causing visitors to immerse themselves and spend more time exploring the spot. There’s nothing more exciting than conquering Kulen mountains by trekking through the primary forest to capture the ancient capital view of Angkor from the top of Mahendra mountain and swimming in the pure Phnom Kulen watershed waterfall.

In Kulen mountains, there are many streams that make up the gorgeous and majestic waterfalls. This is also one of the rare tourist places in Cambodia having natural waterfalls. After the forest trekking tour, many visitors choose these waterfalls to stop to camp, rest, and eat. In Kulen National Park, they could be delighted in the wave, the cool water, and the pure fresh air of the mountains and forest here.

According to documents, in Kulen Mountains National Park, there are 37 ancient temples and pagodas which are thousands of years old, of which the most prominent one is Preah Ang Thom temple, also known as Giant Buddhist temple. The temple is located on a giant stone of nearly 20-meter height and dozens-of-meter width. The upper part of the stone was carved into a lying Buddha statue which is 9.7 meters long and 3.3 meters high.

According to legends, in order to construct the Angkor wonder, the Khmer people were assisted by gods and the evidence stored here is the right footprint of him, which is 2 meters long and 0.4 meters deep. Preah Ang Thom temple has become a famous pilgrimage site, visited by many Buddhists and prayers. The Buddhist scripture has harmonized with incense smoke and mountain wind, creating an impermanent space like in heaven.

River of a Thousand Lingas

From the Giant Buddhist temple, walking through the tropical primary forest and the bumpy rocky mountains, tourists will have a chance to explore the sacred River of a Thousand Lingas, also called Stung Kbal Spean river. 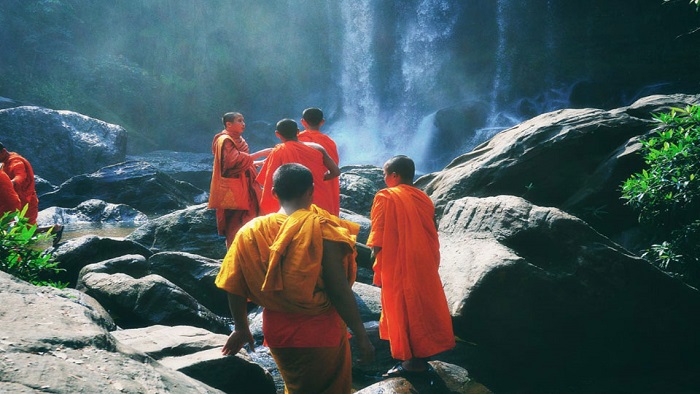 This river has many beautiful waterfalls with a cool and crystal clear water flowing through the woods, along with the winding and curvy paths. In 1054, King Hashavarman III made a dam of the river and made a unique work, turning the stone in the middle of the river into a magnificent sculpture. Thousands of statues of Linga and Yoni of all sizes, Deva god, and Apsara fairy were carved into the rocks under the river. The architecture and sculpture are not only in the Hindu style but also bearing the Buddhist mark. River of a Thousand Lingas are so sacred to attract many pilgrims.

Every year, many people come to the river and sit on the Linga and Yoni sculptures to pray for strength, eliminate all mistakes, and receive good luck. Children come here to bathe with the desire to have more health and intelligence. Especially, on holidays and at moonlit nights, tourists often go to the temple to sing or divide into small groups to the smaller temple to pray, etc.

One of the most famous spots in Phnom Kulen mountains visited by many people is the relic of stone elephant Srah Damrei. This is a stone elephant of 3-meter length and 4-meter height, surrounded by sculptures of some marble lions. According to the folk stories, this stone elephant was a leprosy man. Just because he did not believe in the healing talent of the old monk, he turned into stone.

Phnom Kulen National Park is an exciting tourist destination, hiding many mysteries for travelers to explore. Therefore, if you have the tours to Cambodia or package tours Asia, don’t forget to spend time in this sacred, beautiful, and interesting destination. Thank you.