For many years sinking in the guns and bullets of the war, Cambodia nowadays still suffers from the serious consequences of the war. In order to enhance the people’s knowledge and warn the danger of the war, the Cambodia Landmine museum was born and becomes one of the important memorable museums in Vietnam Cambodia tour that tourists can stop it.

An overview of Cambodia landmine museum 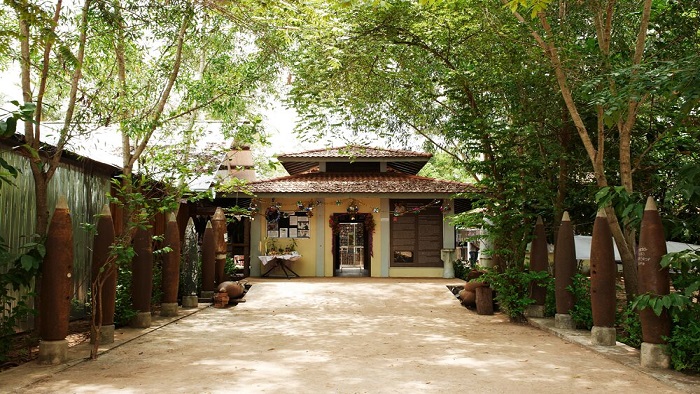 The museum is approximately 3.2 km from the World Heritage site of Angkor Wat and only 1.6 km from the center of Siem Reap city. However, the road leading to this museum is quite bumpy.

The museum is only a few years old when it opened to welcome tourists in 1999. The structure just consists of a simple iron building, surrounded by the storehouses and open-air sleeping and eating quarters. The founder and director, Aki Ra, is a 31-year-old mine clearer and also an ex-soldier fighting against the Khmer Rouge.

Before visiting this museum, tourists can be heard stories about a young Khmer man, Aki Ra, who cleared landmines with a stick and had a house full of defused ordnance. Aki Ra began charging a dollar for people who want to see his collection, and he used the money to help his work. Then, that is the reason the Cambodia Landmine museum was born.

In 2007 the Cambodian government ordered Aki Ra to close the old museum to move it to a new location. The new museum is 40 kilometers from Siem Reap, near Banteay Srei temple, inside the Angkor National Park. A Canadian non-government organization co-operated with the Cambodia Landmine Museum Relief Fund to raise the money to buy the land and build the museum. Most of the money was sponsored by Tom Shadyac, a movie director from California.

The new museum opened in May 2007 with 4 gallery zones as well as being the common house for 27 children.

What to see in this museum 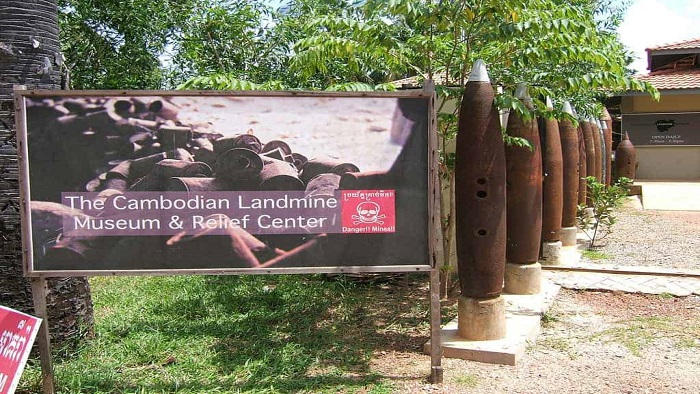 Although it is not a big museum, the artifacts displayed in this museum is pretty much unique in the world. In the center of the museum, you can see a kind of shrine placed in a small pond. Behind glass, you can see thousands of mines and mine shells.

In the showrooms, you can see thousands of shells, mines, small weapons and other rusting military hardware through the layer of glass. Lingering longer to read the informational charts, texts in flawless English, photos, and some rather graphic artistic impressions, such as paintings depicting scenes of landmine-maimed children is such a meaningful moment for you to understand deeper the merciless of war and weapons.

Coming to another showroom, you will have a chance to see an enlarged fake cover of a fictitious Tintin comic book entitled "Tintin au Cambodge" on display. The book tells about the hero on crutches with half a leg replaced by a prosthetic artificial one, the Cambodian pride of Angkor Wat and a landmine warning sign in the background. Although you can easily buy this postcard anywhere else in Cambodia, it seems to be more meaningful here.

An outstanding feature is also the museum's "mine garden". It is so wonderful for you to learn how to solve with mine if you see it in reality. The mines and shells are of course 100% safe, though you will feel chilling and creepy.

The other destinations near Cambodia landmine museum 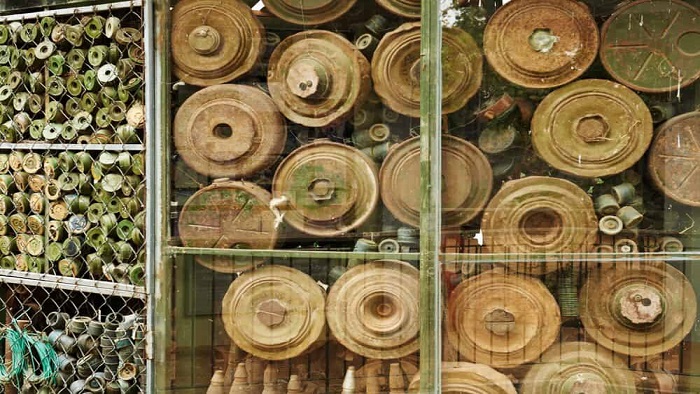 The War museum in Siem Reap is near to the Landmine Museum. This museum also displays the old mine-shells and mines, but mostly it is about military gear. The biggest exhibits include an old Chinese fighter jet, a Soviet-built helicopter, several rusting tanks and various big and small guns. If you have enough time, you should consider visiting this museum after having a trip to the Landmine Museum. The War Museum is in the west of Siem Reap which is near the airport.

The temple complex of Ta Prohm

The temple complex of Ta Prohm, which is located on the route to the Landmine Museum, is one part of Angkor that has been left in the jungle for a hundred years. So Ta Prohm is the only destination at the complex of Angkor that will bring to you an impression like you are adventuring in a pristine forest and then accidentally discovering an amazing ancient temple abandoned in the forest for hundred years. Ta Prohm is receiving more fame after having been used as a film set for the Lara Croft movie. It's best to come here in the early morning or late afternoon.