The 3 most beautiful churches in Northern Vietnam

Being the second greatest religion in Vietnam, Catholic owns impressive constructions. In Northern Vietnam, there are several churches that have unique architecture but still keep their solemn beauty. Here are the most beautiful churches in Northern Vietnam which have not only religious values but also architectural ones. Remember to take Vietnam package tour to get more information about how to travel in Vietnam. 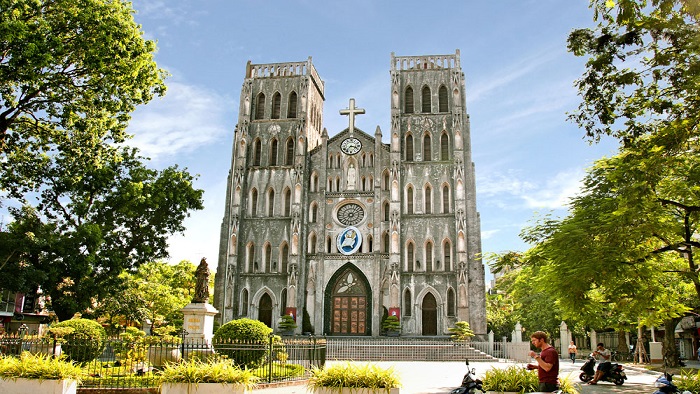 Located in the center of Hanoi capital, St. Joseph Cathedral which was built in Gothic Revival Style by the French colonial administration has been in operation since 1990. Being the oldest church in Hanoi, St.Joseph Cathedral has the architectural features similar to the Notre Dame in Paris. The cathedral holds the specific characteristics of Gothic style such as tall windows and sharp arches. The exterior part of the cathedral which is 64.5 meters in length and 20.5 meters in width has the twin bell towers resembling the Notre Dame in Paris. The exterior walls which are made of granite stone have been stained due to being challenged by time. The outstanding thing about St.Joseph Cathedral is the main site of worshiping in the interior part is decorated in Vietnamese traditional architectural style with the dominant colors that are red and yellow.

Time of the daily ceremonial practice:

â–º The special ceremony is held on 19th March annually.

How to reach St.Joseph’s Cathedral

â–º By motorbike or car: you may park your vehicle in the parking area near Hoan Kiem lake, which is parallel to Cau Go Street 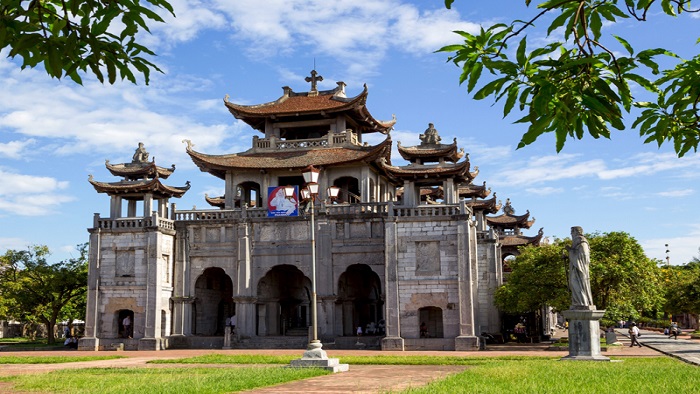 Located in Kim Son district of Ninh Binh province, which is the largest Catholic area in Northern Vietnam, Phat Diem cathedral is considered to be one of the most unique architecture churches in the whole country. An outstanding feature of Phat Diem cathedral is the perfect combination of Eastern and Western architectural style. Phat Diem cathedral is a great example of which Gothic architecture blends beautifully with the design of Vietnamese traditional pagoda. In the roof of the towering buildings, which were designed as that of the traditional pagoda, there are imposing Holy Crosses.  In the interior, the pictures of angles in the vaulted ceiling were painted in Vietnamese style while despite being decorated with the Catholic iconography, the interior walls have paintings of Eastern symbols such as unicorns, dragons, tortoises, and phoenixes. May this be the reason why the novelist Graham Greene wrote about Phat Diem cathedral “More Buddhist than Christian” in his book Quite America?  The cathedral was totally made of stone for 24 years by priest Father Tran Luc and the residential followers. Later on, Father Tran Luc’s tomb was placed in the front yard of the church.

How to reach there?

From Hanoi, you go toward 1 Highway until you arrive in Ninh Binh city. When you reach Ninh Binh city, follow 10 Highway for 28 kilometers to the southeast and you will catch Phat Diem cathedral. The route is straightforward and there are several useful signs along the roads so do not worry about losing the way. 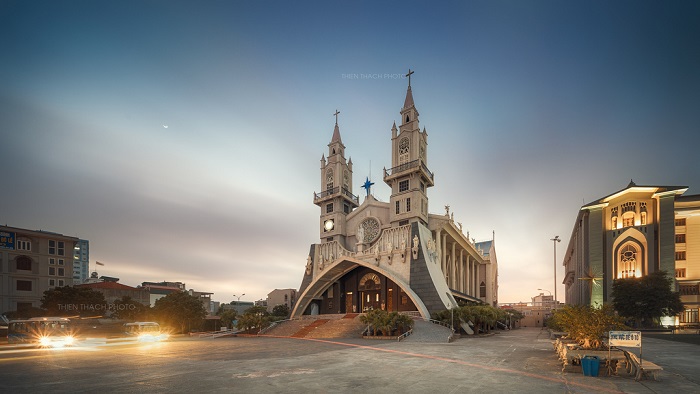 Thai Binh cathedral was initially built in 1906 by the priest Pierre Munagorri with the support of Spanish priest Andreas. After a long time, the cathedral was degraded seriously. In 2005, the new cathedral was begun construction, under the management of the priest Francis Xavier. Be over 6000 meters in area, the new Thai Binh cathedral holds the hallmarks of Bible. Two towers which are 46 meters in length look like two lighting candles, supported by two sturdy hands, directing to the sky, shining brightly, together with the sound of three bells, seemingly calling for people to come with God.  Despite being designed in Gothic style, Thai Binh cathedral still holds the specific cultural features of Vietnam.  The light cream color of the cathedral resembles the color of alluvial, reminding the viewers of the countryside of rice along with Tra Ly river in Red River delta since Thai Binh is the “rice bowl” of Northern Vietnam. The altar is designed as the Vietnamese bronze drum with the relief having the intricate patterns that show the daily activities such as hunting, harvesting or Lac Viet bird wings. The floor is paved by the red-color stone, from distance, looks like a massive carpet, showing the solemnity and magnificence of the site where Holy rituals take place.

These above churches are worth exploring, even if you are not a Christian follower. Let’s visit St.Joseph’s Cathedral, Phat Diem Cathedral and Thai Binh cathedral to contemplate the stunning unique architectural constructions and get more knowledge about the religious life of Vietnamese people. Do not hesitate to take tours to Vietnam. Vietnam is waiting for you. Share the post if you find it useful.

NAVIGATE The 3 most beautiful churches in Northern Vietnam