The spring is considered the religious festival season in the north of Vietnam, so a thousand flows of people pour out the sacred pagodas to pray for luckiness and happiness. Here is the list of top well-known pagodas in the Red River delta for you guys to note in your spring pilgrimage.

This is considered one of the oldest and most beautiful pagodas in Vietnam which were built during the 6th century on the bank of the Red River and it was originally named Khai Quoc.

Nowadays, it is known as Tran Quoc pagoda and according to the stele from 1639 saying that it was moved to the incredible area of the West Lake in Hanoi in the 17th century. Since then, it has remained the most impressive decoration of this area, attracting a large number of tourists. 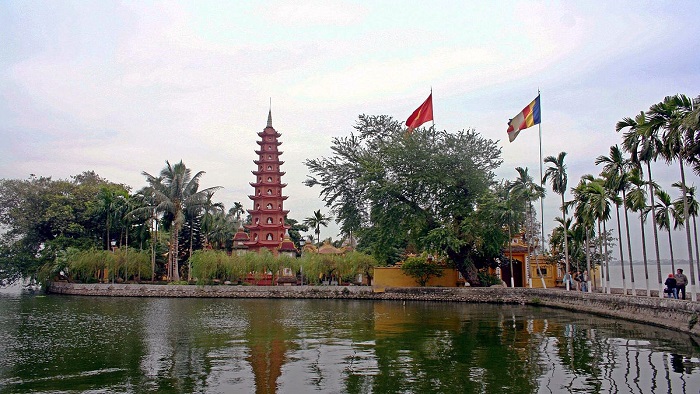 Dau pagoda is the oldest pagoda in Vietnam where the first Indian monks set foot in Vietnam to evangelize in the first century. With its three floors and the 17-meter tall of the old tower named Hoa Phong, the stunning Dau pagoda represents the cultural, historical, and religious hotspot of Bac Ninh province, surrounded by numerous other important buildings, including temples, tombs, and Luy Lau citadel.

According to the local people, this pagoda is also known as Thien Tu Phuc Monastery and it was established in the 13th century but it was several times improved and renewed, especially during the 17th and 18th century.

Con Son pagoda is located in Cong Hoa commune, Chi Linh district, Hai Duong province, which is 100 km from Hanoi. With more than 80 rooms and 385 statues, including the oldest statue which is Amida, this impressive pagoda is also known for the small garden separating the pagoda and the ancestor house, where you can find more incredible statues including the statue of Tran Nguyen Dan, Nguyen Trai etc.

One Pillar Pagoda is located in the center of Hanoi, and it is one of the must-visit places to visit in Hanoi because of its special architecture. This pagoda lies on a single wooden pillar of 1.25 meters in diameter. This is an ancient pagoda built under the Ly dynasty for the sake of King Ly Thai Tong. There is a legend that the Emperor Ly Thai Tong at that time was quite old but he still hadn’t had a son, after a dream that he met the Goddess of Mercy and then, he married a young peasant girl who gave him a son. The pagoda was built in 1054 to express his gratitude for the event.

Keo pagoda is one of the most beautiful pagodas in the north of Vietnam, which is located in Vu Thu district, Thai Binh province. The official name of this pagoda is Than Quang Tu which means the sacred light. According to researchers, the pagoda now comprises 128 rooms arranged with those for worshiping the Buddha in the front and those for worshiping Genies in the back. The pagoda has 3 lakes around it, one in the front and two at both sides, creating a beautiful surrounding.

Visitors to Keo pagoda area will be amazed at its front gate which is 2 meters high and 2.6 meters wide. It is engraved with dragons that embrace the aesthetic style that came after Le dynasty (1428-1789). 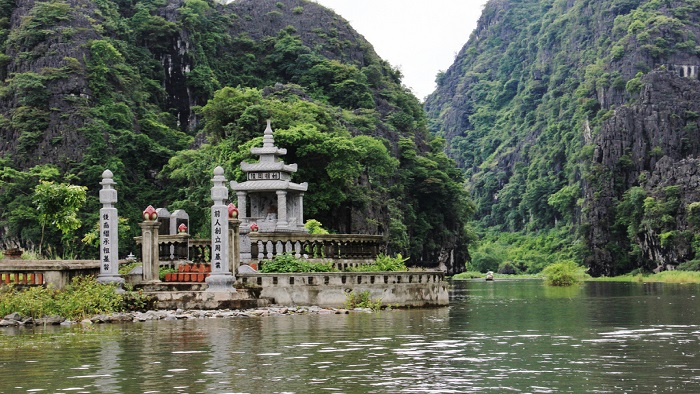 Perfume Pagoda is not only a religious site but also a great sight-seeing spot in the north of Vietnam. The best time to visit this pagoda is the spring during its festival season. It is considered the most elaborate festival of the country, which lasts from the beginning of January to the end of March of the lunar calendar, the pagoda attracts millions of pilgrims and visitors.

Perfume Pagoda is located in Huong Son commune, My Duc district. It is about 60 km from the southwest of Hanoi. It is one of the largest and most unique religious sites in Hanoi with a complex of pagodas, shrines and communal houses scattered on Huong Son mountain. The most sacred and beautiful place of the complex is Huong Tich pagoda which is located inside Huong Tich grotto, where you must visit to witness the trace of Lord Trinh Sam on the stone wall with the word “Nam son de nhat dong” which means “ The most beautiful cave in the South”.

Bai Dinh pagoda is a Buddhist temple complex, where you can find 500 statues of Buddha that carved in the variety of shapes and poses, especially there is a Buddha statue that’s made of bronze with 10 meters in height. The pagoda is located in Gia Sinh commune, Gia Vien district, Ninh Binh province near the famous attractions such as Trang An, Tam Coc-Bich Dong, where the locals often go to pay their respect and contemplate the romantic landscape around the pagoda. Bai Dinh pagoda not only has the breathtaking views of surrounding mountains but also has a variety of activities for tourists when visiting this pagoda such as exploring grottoes and hiking through the forest.

This is the most remarkable pagodas in the Red River of Vietnam we can list in brief, there are more other beautiful and sacred pagodas in northern Vietnam you can visit in your Vietnam package tour. If you need further information about the list of pagodas in Vietnam, feel free to contact us. Have a nice trip!