Cambodia is a Buddhism country located in Southeast Asia with the up and down history. Visiting the sacred temples is a must-do thing you have to experience in your Asia tour, and one of the sacred temples we recommend you to visit is Banteay Srei temple.

An overview of Banteay Srei temple 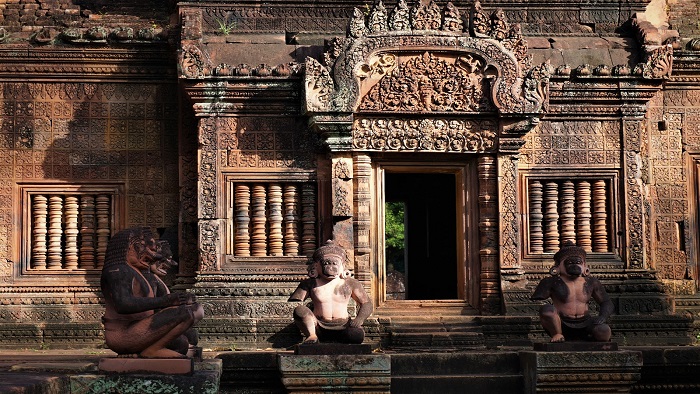 Banteay Srei is an ancient temple in Cambodia which was built in the 10th century during the flourishing development of the glorious Angkor period. This temple used to belong to the ancient kingdoms of Yasodharapura and Angkor Thom. Banteay Srei is the modern name of this temple which means “the citadel of women” but in the past, it was called Tribhuvanamahesvara. The main material to build this temple is red sandstone, so it is also called the pink temple. This temple is a symbol of the sophisticated and meticulous cravings of Cambodians in the past.

The temple consists of low walls surrounding the structures built of red sandstone. The reliefs on this temple are so sophisticated that many people think that they could only have been carved by the hand of a talented woman. Thanks to the well-preserved relief carvings on the central buildings, you can have a chance to see the described scenes from ancient Hindu tales.

The temple was completed in 967, it was the only major temple at Angkor which wasn't built for the king. For some reasons, Banteay Srei was constructed by Yajnyavahara who was a counselor of the King Rajendravarman with the aim to dedicate to two highest Gods in Hinduism, Shiva, and Vishnu. It is 25 km from the hill of Phnom Dei where the capital of the time kingdom "Yashodharapura" was located.

The temple was expanded and rebuilt in the 11th century. At that time the temple was under the control of the king and somehow the original dedication of the temple was changed to serve the hobby of the King. However, there was the place to dedicate Shiva and it remained in use at least until the 14th century. 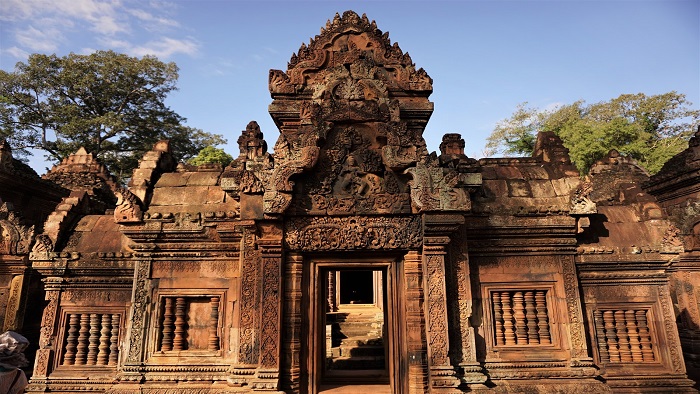 After a long time forgotten in the forest, the temple was firstly re-discovered in 1914, and then Banteay Srei became the destination of thieves and the most famous thief is André Malraux who stole four devatas in 1923, he was soon arrested and the valuable things were returned.

In the 1930s, Banteay Srei was restored for the first time and this was also the first time people started to use anastylosis at Angkor. In order to prevent the temple from water damage, a drainage system was installed between 2000 and 2003 by the cooperation of Cambodia and Sweden in the Cambodian-Swiss Srei Conservation Project.

How to get to Banteay Srei temple

It is just around 20 km from the main Angkor complex-the best tour in Cambodia and over 30km from Siem Reap center, it is quite easy to catch a tuk-tuk from Siem Reap to Banteay Srei temple. On the way to this temple, you will have a chance to see the beautiful and peaceful views of the local villages and wide rice fields. If you go to the temple from Angkor, it takes around 30 minutes.

If you don't choose the tuk-tuk for your transportation, it is okay to rent a bicycle or get in the taxi to visit Banteay Srei temple. On the way to the temple, you will go through the Landmine Museum which is the center of non-government organizations working for children affected by landmines, so it is worth spending a short time to visit before coming to Banteay Srei.

When to visit Banteay Srei temple

The best time to visit Banteay Srei temple is in the early morning or late afternoon. The mid-day in the temple is very hot and there is almost no shade of trees to avoid the heat. So it is best to visit during the cooler times of day, which can also give you the opportunity for some stunning photos of the red temple in the slight light. 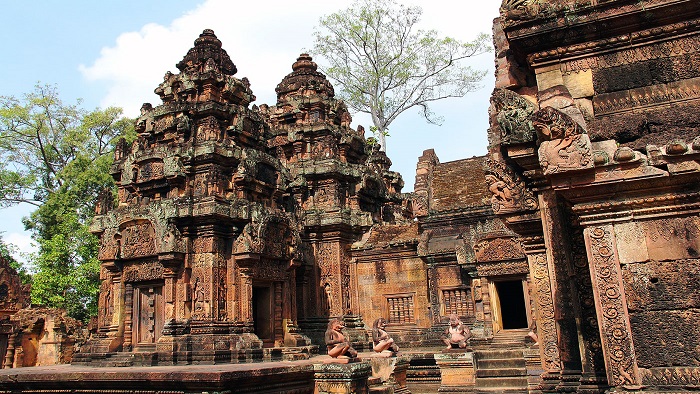 What to see at Banteay Srei temple

Banteay Srei architecture is a combination of the archaic and the innovative. When you come here, you will be surprised by the red color of the temple because the temple was built largely of red sandstone with the brick and laterite used for the walls. That is why the color of this temple is unique that you will never have a chance to see in the other temples.

The doorways are quite narrow but it is high enough for an eight-year-old to comfortably pass through. However, it’s well-known the most for having the most detailed, sophisticated, and intricate carvings of all of the Angkor temples. Virtually every available surface features intricately portrayed stories and motifs. However, in the main temple, there are the two libraries and the sanctuary which features the most elaborate carvings. The temple is where dedicates to Shiva, although Vishnu is also dedicated in the southern buildings.

Banteay Srei temple gains to the highest sophisticated architecture of the golden period of the Angkor and this temple deserves to be the pride of Cambodia. If you have any questions, contact us to get more information. Thank you!