Visit the Buddha Park -The unique Buddhism garden in Laos

Laos is a beautiful country in Southeast Asia with the peaceful beauty and friendly people. Located in Vientiane, the capital of Laos, the Buddha park has become one of the famous tourist attractions in tours of Laos for tourists whenever visiting this city.

An overview of the Buddha park

The Buddha park is also known as Xieng Khuan which means “the city of spirit” in the Lao language. The park was built in 1958 by Luang Pu Bunleua Sulilat. He was a priest-shaman influenced by a Hindu Rishi during the time living in Vietnam. After 1975, he felt anxious about his safety under the rule of Pathet Lao, he fled to Thailand where he built Sala Keoku in Nong Khai which is another sculpture park. Both parks are located on the bank of the Mekong river right next to the Thai-Lao border, and it is only a few kilometers apart from each other.  The tallest structures of the Buddha park in Laos can actually be seen from Thailand. 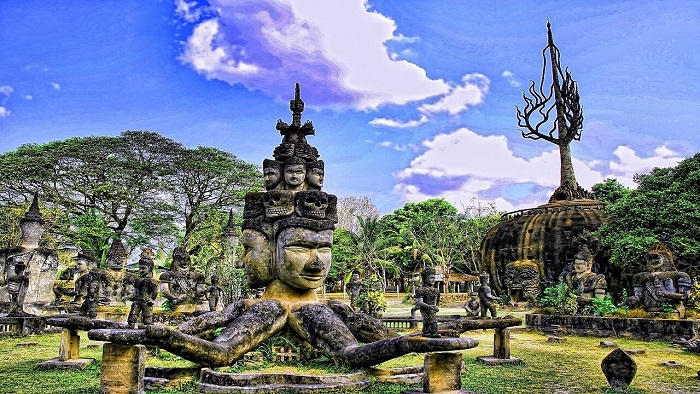 How to get to the Buddha park

The Buddha park is located around 24 kilometers from the center of Vientiane, on the way to the Friendship Bridge connecting Laos and Thailand. It takes an hour to get there from Vientiane due to traffic congestion and poor road conditions.

There are several ways to get to the Buddha park but the easiest way is that you just need to jump in a tuk-tuk directly and haggle for the best round-trip price. Because the way is not too far, you should pay a round trip ride for less than 90,000 kip.

Another way that you can save your money is that you go to the Talat Sao bus station to catch the bus number 14 to the Buddha park. It is around 20 minutes for a bus trip, the large bus leaves every 20 minutes with the cost 6,000 kip.

The bus number 14 will stop at the foot of the Laos-Thailand Friendship Bridge and then you have to catch a minibus to get to the Buddha park. Remember that you have to ask the driver whether this minibus run through Xieng Khuan or not in advance to make sure you will go to the park in the shortest time.

The unique beauty of the Buddha park

The park holds over 200 sculptures which are made from concrete in many different sizes and shapes. The sculptures of the Buddha and Hindu Gods, as well as the statues of demons and mythological creatures like a three-headed elephant, snake, etc, are pretty delicate and unique. Although it has just existed over a half of century, you will have the feeling that they are here for the hundred years.

Unfortunately, there are very few signs explaining in English about the sculptures, so it is quite difficult for tourists to understand their meaning. The sculpture garden is in a park with a lot of trees and the good views of the Mekong river. On the ground, you can see the food vendors, gift shop and restaurant overlooking the Mekong river.

Most of the sculptures and statues of the Buddha and Gods in the Buddha park are faced to the East, whereas the sculptures depicting the death and demons are oriented to the West. Because each sculpture has its own history, the best well-known sculpture is the pumpkin tower.

One of the most impressive sculptures is a giant three-floor pumpkin. In the front of the giant pumpkin, you can see a large mythological creature with its open mouth, it is the entrance of the tower. The three floors imply for the Hell, Earth, and Heaven. There is a staircase inside the pumpkin which leads to the platform where you can witness the good views of the park. 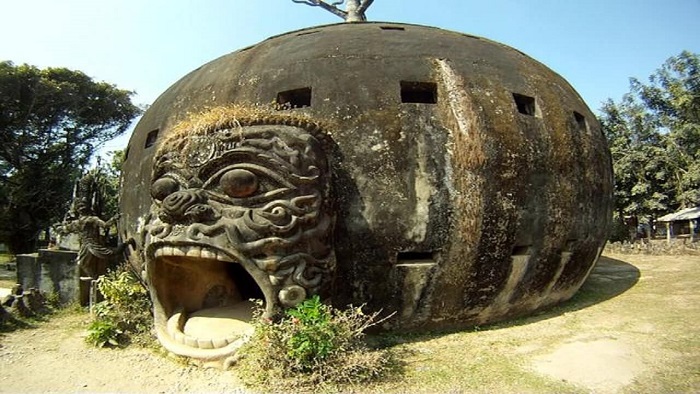 The largest Buddha sculpture in the Buddha park is the reclining Buddha statue with the length of 120 meters. This sculpture has been built in recent years and it is made use of as a temple with that name called Wat Xieng Kuane.

In front of the large reclining Buddha statue in the Buddha park, you can see a small chapel where people come to pray and give the offerings in the festival days of the temple Wat Xieng Kuane. 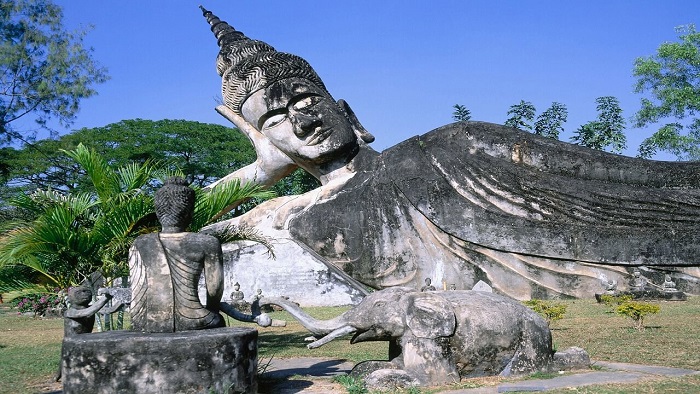 The reclining Buddha statue (via justgola.com)

Entrance fee to get to the Buddha park

The Buddha park opens every day of the week. When you come to the park, there is a kiosk in front of the park where you can go to buy the entrance fee. The price of the ticket is 5,000 kip but if you want to use the camera, you have to pay an extra of 3000 kip. The parking costs 3,000 kip.

With its wild natural beauty and friendly people, Laos is becoming one of the best tourist destinations in Asia. Coming to Laos as well as the Buddha park via Asia package tours, you will have the chances to explore and experience the unique features of cultural identity of this beautiful country. If you have any questions, feel free to contact us. Thank you!