The ancient capital Hue is home to numerous amazing destinations and famous pagodas and Thien Mu Pagoda is one of them. With the unique and ancient architecture, Thien Mu attracts a lot of tourists when taking best Vietnam tours.

The history of the pagoda

Thien Mu is the earliest pagoda built in Hue. According to the history, when coming to Thuan Hoa and Quang Nam, Lord Nguyen Hoang – the first Nguyen Lord in the Central considered the terrain to prepare for the establishment of the dynasty. Once riding a horse along the Perfume River up to the head of the river, he saw a small hill beside the river named Ha Khe.

Recognizing that the area is like a dragon turning its head back, in 1601, he built a pagoda on the hill facing the Perfume River and named Thien Mu.

Also at that time, the local people said that a woman with a red shirt and green trousers appeared on the hill and told that there would be a godfather come to build the temple to make the country prosperous and powerful. Therefore, the residents totally supported the temple building of the King. 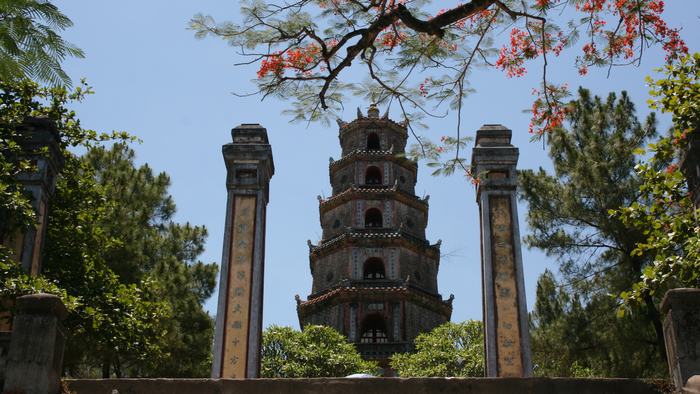 In 1862, Tu Duc King – the fourth king of the Nguyen Dynasty with the wish of descendants changed the name of the temple into Linh Mu. However, after 1869, people used both name Thien Mu and Linh Mu.

The architecture of Thien Mu Pagoda

Under the Nguyen Lords, Thien Mu Pagoda has been undergone many major repairs. In particular, the highlight one is the restoration of the scale under the Lord Nguyen Phuc Chu (1691 – 1725). In addition, in 1710, he molded a large bell weighing over two tons named Dai Hong Minh.

In 1714, he continued to renovate architectural works such as Thien Vuong shrine, Dai Hung shrine, Thuyet Phap House, and Tang Kinh tower. He also wrote a poem and carved into a large stele to talk about the construction of buildings in the pagoda. In particular, he also bought over 1000 Buddhist scriptures from China and put at Tang Kinh to chant the Buddhist philosophy and wrote clearly the story of the Venerable Thanh Liem who has great merit in helping Nguyen Lord restore Buddhism in the South.

With the great investment, Thien Mu pagoda became the most beautiful one at that time and one of the most famous sites in Hue. 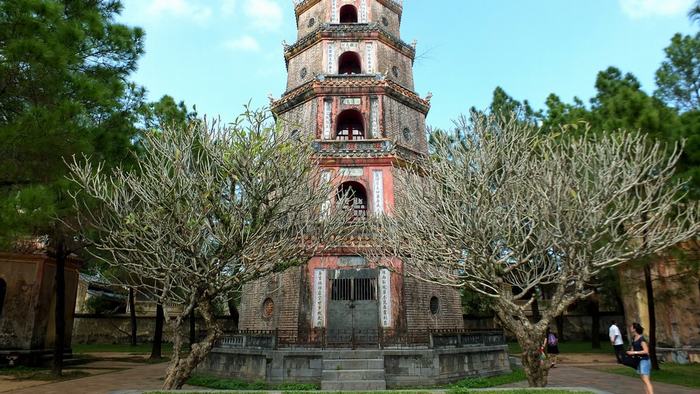 In 1788, the Tay Son Dynasty chose the pagoda as the place for the land worship. Under the reign of King Thieu Tri in 1844, a new octagonal tower named Tu Nhan was built and later changed to Phuoc Duyen. The tower was built in front of the pagoda with a height of 21 meters including 7 floors and each floor has a statue of Buddha. The top floor had a gold Buddha statue of which the architecture associated with Thien Mu Pagoda.

King Thieu Tri also built Huong Nguyen Temple in front of the tower of which has the Falun Dafa – the Buddha Dharma wheel – the symbol of Buddhism. However, the temple was collapsed by a strong storm in 1904. In 1907, King Thanh Thai rebuilt the temple but it was not as large as one before.

At present, Thien Mu Pagoda is holding two Vietnamese records which are the pagoda with the largest stele and the highest octagonal tower. The pagoda is also ranked in the list of 20 landmarks of the ancient capital and is an indispensable destination in tours Vietnam.

The expletive of love 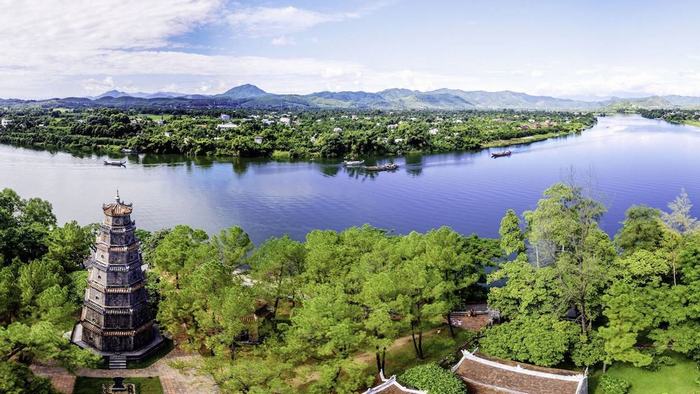 Not only famous for the ancient architecture, but Thien Mu Pagoda also associated with a mystical spiritual story. In the past, the parents often decided on the marriage of their children. It was said that at that time, a girl from a wealthy family and an orphan boy fell in love with each other. Due to their parents’ forbidding, they went to Mu boat station (in front of Thien Mu Pagoda) to commit suicide. Ironically, the boy died but the girl washed ashore and was rescued by the people. Then she was forced to get married to a rich man. Over time, she gradually forgot her old love and lived happily. The boy’s spirit was very angry and cursed all couples coming to the pagoda would be broken.

However, a monk in the pagoda said that many couples came to the pagoda and did impolite things. Therefore, people have created a story to keep the purity of the pagoda.

Over four centuries, the old curse has been still spoken, some do believe but some do not. However, there is the fact that this curse makes the temple more mysterious and attracts the curiosity of visitors.

Let’s come and explore this beautiful pagoda and other attractions in Hue as well. For more information about package tours to Asia, you can visit our website. Like and share this article if it’s interesting. Have a nice trip!