Northern Vietnam is the cradle of many traditional art forms of Vietnamese people, and one of the places in Hanoi saving the most unique art form of Vietnam called the Water Puppet show is Vietnam Water Puppet Theatre. If you are interested in this art form, let us guide you to have a day in this theatre.

What is the Vietnamese Water Puppet 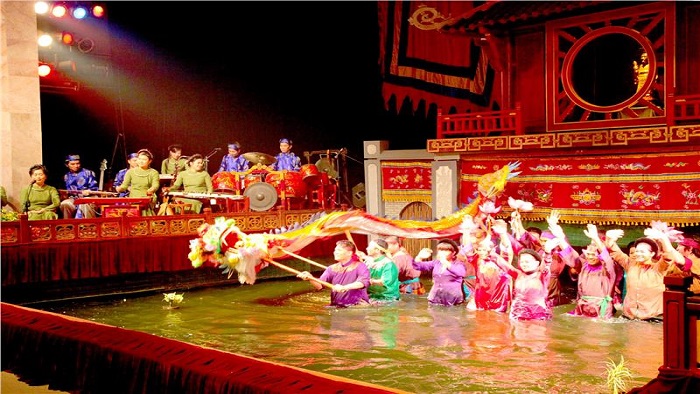 Water puppet is a form of the folk musical art which began from the rural area of the Red River Delta since the 11th century. The traditional art form was originally performed in flooded rice fields as a means for hard-working villagers to relax and escape the harshness of daily life. The shows depict elements of traditional rural life and are an important method of handing down stories to the next generation. The puppets made of wood and waterproofed with lacquer.

The water puppets are controlled by skilled puppeteers standing behind the curtain in a water house called “thuy dinh” in waist deep water using hidden apparatus to create the illusion the figures are dancing on the water’s surface. A minimum of three years of training is required to master the art and the father would only teach their sons and never share with their daughters because it would mean that the secrets would be lost if they married the husbands outside of the village. But it is pleased to say this is no longer the case and nowadays, a number of the puppeteers hiding behind the curtain were women.

Despite the waterproofing, the puppets only have a lifespan of about 4 months when they are used daily and need to be frequently replaced. The water puppet performances are often accompanied by Cheo which is a kind of Vietnamese traditional music from a live band playing drums, cymbals, wooden bells, horns, and bamboo flutes.

Nowadays, visitors no longer need to head to the communal ponds of the northern villages to enjoy this ancient art form, because right in the big cities, you also have the chance to enjoy this unique art form at the water puppet theatres, and one of them is Vietnam Water Puppet Theatre in Hanoi. This theatre is considered the most famous water puppet theatres among them all. Until the 1960’s Vietnamese water puppets were largely unknown outside of northern Vietnam. 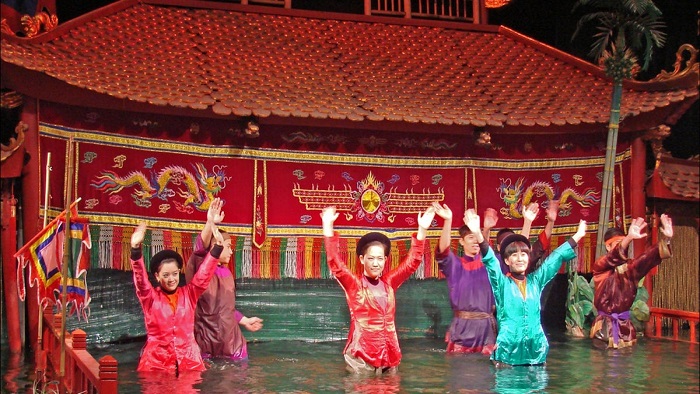 The Vietnam Water Puppet Theatre had the first debut in front of the audience in Hanoi in 1969 and from this time to now, it is the worth-trust address for locals and visitors to come and experience this most curious of Vietnamese traditions. Besides that, the master puppeteers from the Vietnam Water Puppet Theatre performed hundreds of cultural tours throughout many countries in the world such as Russia, England, Switzerland, Japan, and the USA, etc. It is one of the most popular attractions in Hanoi and tickets sell out well in advance. The theatre is near to the Hanoi Old Quarter and just a short walk from a wide range of famous restaurants where you enjoyed a fabulous Vietnamese dishes.

How to enjoy a Water Puppet

There are two ways to hunt the hottest tickets to enjoy the water puppet performance in the theatre. You can spend hours standing in order for a bargain ticket or pay a bit extra and get someone else to do it for you. If you choose the first option, you simply show up at the ticket booth at the front of the theatre and wait for your turn. Or you can choose the second option which is booking your tickets in advance via the app Viator. You have to pay a little bit extra about USD$11 or GBP£8 instead of waiting for hours to wait for your turn, then your tickets will be handed to your hotel.

It is highly recommended to buy a VIP ticket because it will guarantee you a seat in the first four rows of the Vietnam Water Puppet Theatre. The show often longs for roughly an hour and there are four shows in a day with the schedule: 4.10pm, 5.20pm, 6.30pm and 8.00pm.

It is an amazing chance to witness the water puppet performance in the Vietnam Water Puppet theatre, so let's be stable in your seat and willing to enjoy the best moments that the water puppet and music bring to you. As the theatre lights went down and the stage lights began to glow a hush descended over the crowd before the first haunting strains of the band pierced the silence. 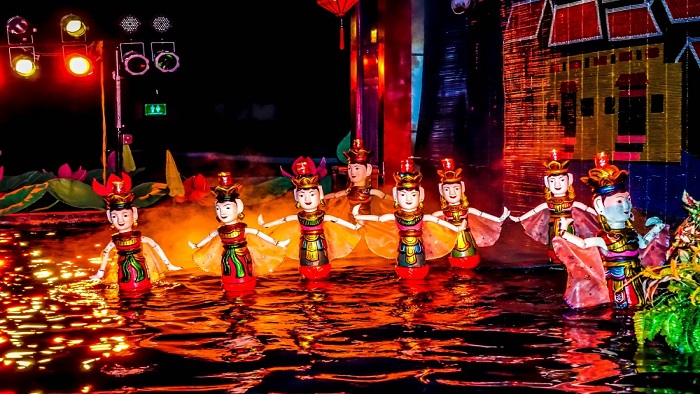 Unlike the other art performances, the stars of the show will now show up to greet the audiences instead of the water puppets which are the main casts of the show. There is a wide range of stories with many themes which are conveyed through the lively action of the water puppets such as the dragon’s dance, catching frogs, fishing and the eight fairies dance. While each story is narrated entirely in Vietnamese, it is possible to get the gist and there were many humorous moments that transcend language. Vietnam Water Puppet theatre is the must-visit place in Hanoi for you to explore the unique kind of musical art of northern Vietnam.

>>Click here to watch a video about an excerpt of water puppet performance.