Belonging to the Ayutthaya Historical Park which was inscribed as a UNESCO World Heritage site in 1991, Wat Mahathat is a stunning place to admire the extraordinary Khmer-styled constructions, among the lush nature. It's truly well worth a visit. Do not forget to take Asia vacation tours to get more information about the best Vietnam tour. 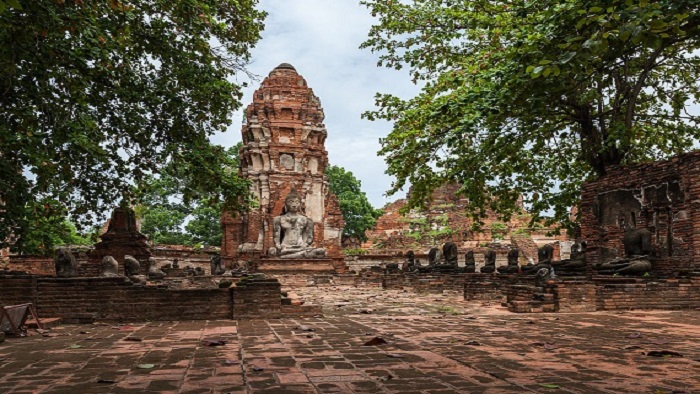 What is Wat Mahathat?

Wat Mahathat or “the temple of the Great Relic” was one of the most important ones in the Ayutthaya Kingdom. Situated on the historical island,  the large monastery houses a huge central prang, a massive principal viharn and ubosot, along with a lot of subsidiary chedis and viharns. The upper part of its once enormous central prang collapsed. Nowadays, only the base remains.

It was one of the most important monasteries in the Ayutthaya kingdom, not only because it was the religious center and enshrined Buddha relics, but also because it is proximate to the Grand Palace. It was a royal monastery and until the end of the Ayutthaya period, this was the seat of the Supreme Patriarch of the City Dwelling sect.

History of the Wat Mahathat

The temple was established by King Boromma Rachathirat I in 1374. A big prang was erected to enshrine Buddha relics. This prang collapsed in the early 17th century. After that, it was restored and expanded. A large number of chedis and viharns (assembly halls) have been added during the reign of next kings.

When Ayutthaya was invaded and largely destroyed by the Burmese in 1767, this was set on fire. In the early 20th century, the central prang collapsed again and it has not been restored.

During excavation works in 1956, the crypt was discovered. Inside the central prang, there was a big hollow stone container, occupying relics and precious objects as gold ornaments, ancient Buddha images and other precious items. Artifacts found in the crypt are on display in the Chao Sam Phraya National Museum. 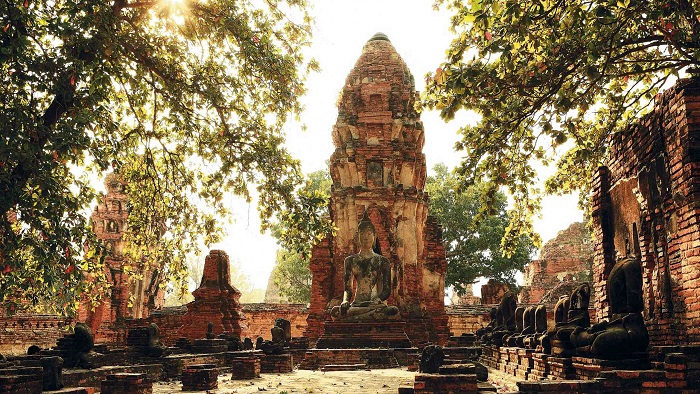 Wat Mahathat follows the signature Khmer concept of temple establishment. It is built in an identical style as earlier built structures in Angkor such as Preah Rup, Phnom Bakheng, Ta Keo and Baphuon. They were all temple mountains, comprising a central tower which is framed by four corner towers, to form a quincunx. The latter part was surrounded by a courtyard and a gallery.

The architecture of a Khmer temple were always modeled according to a chain of magical and religious beliefs. To move from the mundane world to a spiritual, devotees will walk along one of the four axes. Each of them has a distinctive astrological value. The direction of the rising sun, east, was auspicious and represented life and the sexual power of the male. The majority of the Khmer temples were constructed with the entrance to the east. This was the formal approach to Hindu shrines. In general, west is regarded inauspicious since it represents death and impurity. North is also auspicious, whereas South owns a neutral value. The Khmers consent the Hindu belief that a temple must be established correctly, based on a mathematical system so that it can function in harmony with the whole universe. The sanctuary or the resident of gods was in the center of the city in order to imitate Mount Meru which was believed to be the center of the universe by the Khmers. The square-shape layout is similar to the Mandala concept, which indicated the boundary of the universe.

In the early period of the Ayutthaya establishment, all temples were Khmer-styled, comprising the primary structures laterite(instead of sandstone) and bricks, supported with stucco. Basically, Wat Mahathat consisted of a big central prang framed by four subsidiary prangs at the four main points, standing on a square platform. The quincunx was framed by a courtyard and a gallery, lined with Buddha images. During the Ayutthaya period, the gallery was usually penetrated by a monastic structure which may be an ordination or an assembly hall, sometimes even both.

During the reign of King Songtham, the prang fell and the upper part came down. In the third year of King Prasat, the tower collapsed. The stupa was restored in 1633. The prang was raised to the height of 44 meters and reached at its finial height of 50 meters.

Wat Mahathat was restored again during the reign of King Borommakot. Four porticos were added to the prang. However, no evidence of restoration could be found after even though, clearly, viharns, chedis and prangs were added several times. At the fall of Ayutthaya, the monastery was set on fire during the Burmese attack.

The temple is a sprawling complex with monastic units, schools, offices, and buildings, which are worth spending time on exploring. Moreover, there is a tranquil palm garden in the back.

Wat Mahathat is also the home to the Center for Vipassana Meditation at Buddhist University which is one of the most important centers for the study of Buddhism in Thailand. Amazingly, it offers some programs in English. 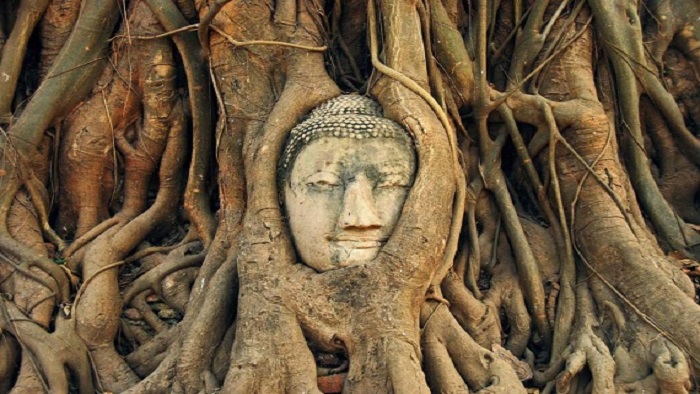 The Buddha statue in the tree

The most popular tourist attraction of Mat Wahathat is a tree whose roots have developed around the head of the Buddha statue. No one knows exactly how it did that, but one theory said that during the period of ruin, the tree just accidentally grew around the head of the Buddha. Another theory suggests that during its final collapse, the site was plagued and a thief hid the Buddha head in this tree, only to never return.

Wat Mahathat is regarded as the most important as well as the most impressive temple in Ayutthaya Historical Park. You will be surely amazed at admiring the excellent works which have existed for thousands of years.