In the package tours to Asia of exploring Cambodia - the land of the temples, Wat Preah Keo Morakot is one of the most famous pagodas that tourists should not miss.

A pagoda of gold and silver

Situated on the left side of the royal palace in the architectural complex of the Royal Palace of Cambodia, Wat Preah Keo Morakot is the most beautiful and famous temple in Cambodia not only in architecture but also in art, also known as "Silver pagoda”, “Gold pagoda", or "Emerald Buddha pagoda". This is where the king, the royal family, and the court officials hold the Buddhist ceremony, so the pagoda does not have religious monks. 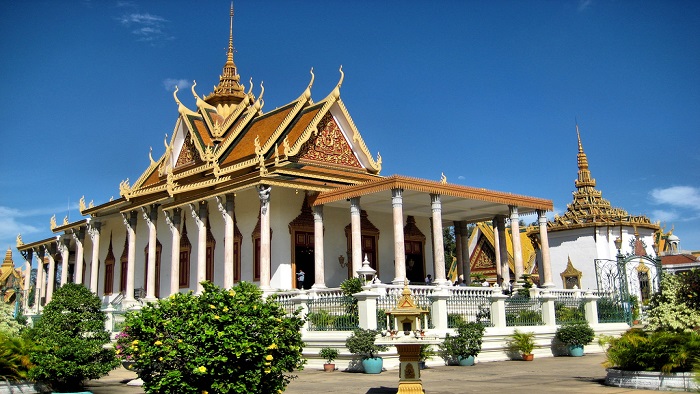 The pagoda has 5,329 pieces of silver paving on the floor, so the Western tourists have called the place as "Silver pagoda". Wat Preah Keo Morakot is also famous for its various religious monuments with more than 1,600 valuable objects. The center of the tower is where the Emerald Buddha statue is located. It is about 60 centimeters high that can only be found in Thailand, Sri Lanka, Myanmar, and more recently in Australia), so the Cambodians call the pagoda as "Emerald Buddha pagoda".

Standing in front of Emerald Buddha statue is the Maitreya statue molded by 90 kilograms of net gold with an attachment of 2,086 diamonds, including a 25-carat diamond on the crown and a 20-carat diamond on the chest. That is why the Asian guests prefer to call it as "Golden Pagoda". The Maitreya Buddha statue (future Buddha) was made of real gold and molded by King Preah Bat Samdech Preah Sisowath in 1904 under the instruction of King Norodom. Especially, the statue has the size as large as a real person. There is also a statue of Buddha sitting in a small tower made by gold and silver, the treasures of Queen Kossomak Nearirith, treasures of royal families, etc.

The architecture of Wat Preah Morakat

Wat Preah Keo Morakot was formerly known as Wat Uborsoth Rothannaream and built of wood in 1892 under King Preah Norodom. In 1902, the pagoda was dismantled to rebuild with wood and brick. It was inaugurated on February 5, 1903, also under the reign of King Norodom. 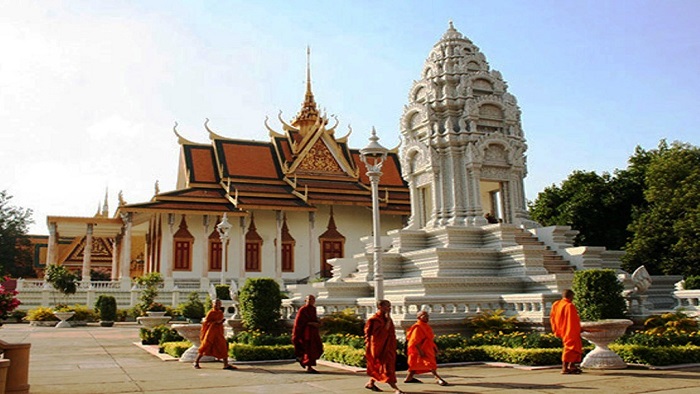 In 1962, realizing the severe damage of the pagoda, Kossomak Nearyreath, mother of King Norodom, suggested that it should be repaired with a more solid material. As a result, a new pagoda had been restored with cement, of which the columns are Italian stone tiles and the floor is 5,239 piles of handmade silver, each weighing 1.125 kilograms. The name Wat Preah Keo Morakot might be placed from this restoration, taken from Keomorakot, a Buddhist in another temple who always devotedly carved many statues of gems.

Surrounding the temple are four walls arranged as the corridors with roofs covering with a total length of 642 meters, on which the series of painting describe the content of the classic epic Ramayana of India (Reamker). These paintings are 3 meters high, completed in the period from 1903 to 1904 by a group of students under the direction of painter Vichitre Chea and architect Oknha Tep Nimit Thneak. Unfortunately, over time with the harshness of nature, part of the works has been damaged. These corridors were once used as the classes of monks before Pali school was opened in 1930.

Inside the pagoda, in addition to the main hall in the central position, there is also a small library for the Pali Canon - the standard collection of scriptures in the Theravada Buddhist tradition; the Dhammasalas building for chanting on Buddhist holidays or for welcoming guests; the small Mondop artificial hill representing the mountain of Kailasa; Keong Preah Bat house which restores the footprints of the four Buddhas and Maitreya Buddha; the bell tower in the back corner; and the Angkor Wat model that is the relics of the Khmer civilization.

Inside Wat Preah Keo Morakot, in front of the main hall, there is a statue of King Norodom riding a horse and looking straight ahead. This is a work of the French artisans in 1875, given by King Napoleon III and placed inside the pagoda since 1892. At the two sides, there are the two graves of King Ang Duong (1845 - 1860 and King Norodom (1834 - 1904) built in 1908. Behind the main hall are the two graves of King Norodom Suramarit and Queen Kossomak Nearireath, built in 1955 - 1960. 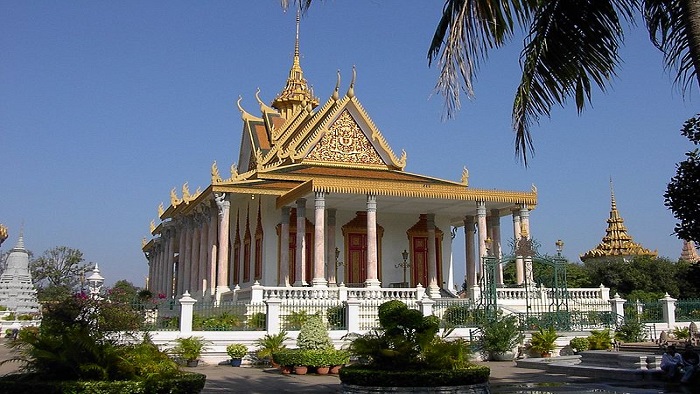 As a royal pagoda, the Golden pagoda obviously functions to store religious relics. It houses more than 1,050 Buddha statues and treasures of gold, silver, bronze, and valuable materials donated by the Kings, Queen Kossomak Nearyreath, and the royal family. They are considered as the national treasures of Cambodia Kingdom. In 1985-1987, the pagoda was restored, especially the Reamker paintings.

Visiting Wat Preah Keo Morakot with architectural works in the Royal Palace complex, visitors will have the opportunity to admire the vivid traditional Cambodian architect through the patterns, sculptures, etc, like passing through the past of a cultural country. If this is helpful for your Cambodian tour groups, please like and share with others. Thank you.