Wat Sisaket is located on Sethathirath street on the corner of Lane Xang highway, Vientiane capital city, and it was built in the 17th century. Sisaket is considered the temple storing most statues of Buddha in Laos with 6,840 large and small Buddha statues and also a library containing many ancient handwritten books on palm leaves. Along with That Luang and Phra Keo, Wat Sisaket is one of the three oldest and most famous temples, a popular tourist destination in tours Laos.

The pagoda has a 5-roof-layer structure and a corridor surrounding the main temple. It is probably because of this architecture that Wat Sisaket was not destroyed when the Siamese invaded Vientiane in 1828. For now, Wat Sisaket is known as the oldest temple in Vientiane. There is also another legend that when the Siamese army was being about to attack the temple, a dark cloud covered the sky. All the soldiers dismayed and supposed that the heaven was angry, so they automatically withdrew. As a result, Sisaket is the only temple existing and continuing to serve as a spiritual sanctuary throughout the nineteenth century and to this day. 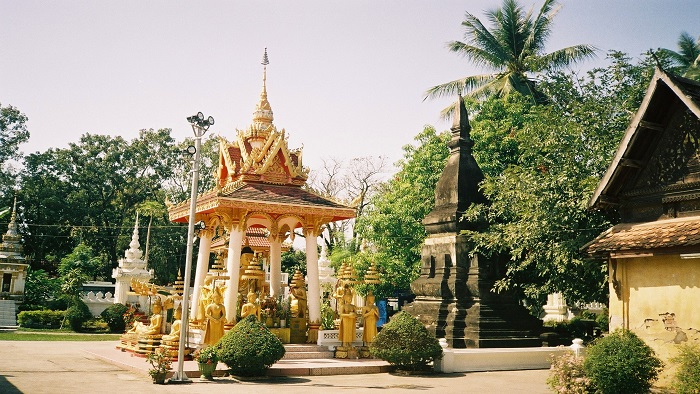 Wat Sisaket attracts tourists by its historical and religious values

One attraction in the temple is the corridor surrounding "sim" (main temple). The walls inside the corridor are the place representing more than 2,000 statues made in the 16th and 19th centuries. Around the corridor, there are also more than 300 statues of Laos sculpture made of wood, stone, or tin in Vientiane in the 16th and 19th centuries. The lower shelf displays over 300 Buddha statues in Laos style as well. The western corridor displays a series of broken statues - the result of an assault by the Siamese in 1828.

Noteworthy, in the main hall and a few rooms around, there are many rare and precious gold-plated ancient plain statues. Visiting Sisaket, everyone should not miss the "Buddha statue warehouse" lying on the left side of the temple. The door is simple with wooden planks, revealing inside hundreds of large and small Buddha statues. Some statues have only the body, some loose hands or legs, and some have only the plinth. However, all of them have one thing in common, that is the lost head. 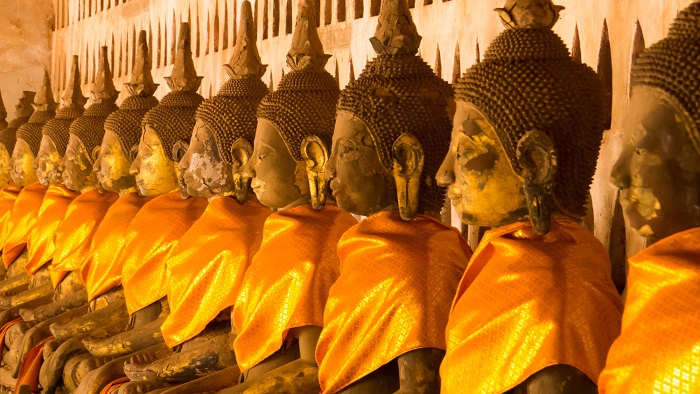 Buddha statues in the temple (kyluc.vn)

Because of both spiritual and material values, every temple in Laos wars was devastated or looted. Enemies wanted to not only remove the spirit of the Laotian people but also bring the high-value material wealth to their country. To be convenient, they often cut the statue’s head, melt, and cast them into ingots. 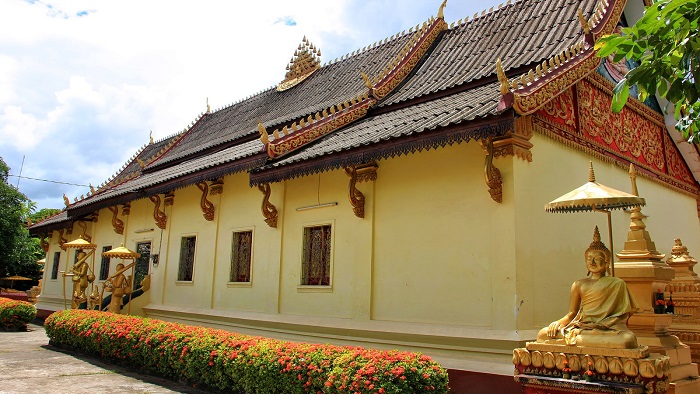 There are thousands of Buddha statues in Wat Sisaket (vietnamitasenmadrid.com)

After each war, the Laotian people laboriously rebuilt the temples and molded mysterious Buddha statues. As peace-loving people, they want to remind their descendants through the remnants of meaningless wars.

It is also a museum of more than 8,000 valuable books and 6,840 Buddha statues made of various materials such as bronze, stone, wood, silver, or gypsum, etc. Inside the main hall are hundreds of sockets, each one has a Buddha statue, giving a sense of protection to people who come here for praying. The outer courtyard system also houses hundreds of large and small Buddha statues. In addition, there is a library of many 400-year-old Buddhist handwritten writings on palm leaves. 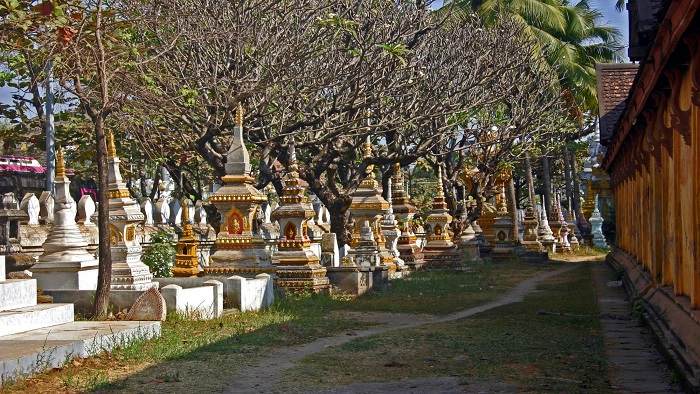 The must-visit tourist destination in Laos

For Laotian people, Buddhism is national religion. Sisaket is one of the symbols of Buddhism in this gentle country. Tourists can meet temples influenced by other religions, but over time, these religions will be transformed gradually towards Buddhism to be close to the customs and lifestyle of the Laotian people.

Wat Sisaket is just like other temples in the Land of a million Elephants. Every day, monks still have to go begging. The begging happens only in the morning and they absolutely can receive an unlimited amount of foods that people give. These foods, besides serving two meals in the day, are for the soul sent in the temple. People who give food to the temple everyday also partly want to send food for their loved ones in the afterlife.

Traveling to the Land of a million Elephants, if you do not visit the ancient temples like Wat Sisaket and do not bow down the mystery of the Buddha statues, you have missed the most characteristic of the Laos culture. For more information of Asia tours and travels, don’t hesitate to contact us. Thank you.