Why must you discover Ba Vi National Park right now?

You are a nature lover? Do you love outdoor activities? Ba Vi National Park is for you. Being 65 kilometers away from Hanoi, this place seems to be a totally different world. Discover Ba Vi National Park and mix yourself with nature in the fullest way. 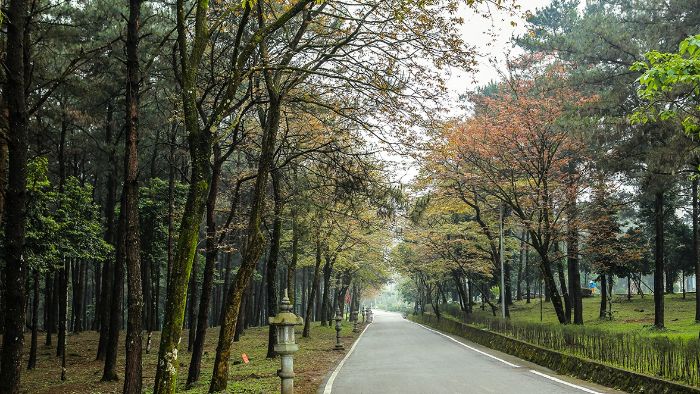 What is Ba Vi National Park?

Located in Ba Vi district of Hanoi and Luong Son & Ky Son district of Hoa Binh province, Ba Vi National Park is totally 11,372 ha in area, including 2,752 ha of the forest individually. Lying in the Ba Vi mountain range running north-east and south-west, the park has three peaks: Dinh Vua at 1296 meters, followed by Tan Viet at 1226 meters and Ngoc Hoa at 1220 meters. Ba Vi National Park not only is the home to hundreds of wildlife species but also owns natural caves, orchid garden, Ho Chi Minh temple, relics built during the French colonial period and an important site for scientific research, which are worth spending time exploring.

The lungs of Hanoi

The nature forest at Ba Vi which is considered to offer the oxygen for the whole Hanoi is mostly distributed at the elevation above 600 meters. The park which is green and lush during the year owns tropical and subtropical plants. Nowadays the park has 1,209 species of plant, including 812 species of vascular plants which belong to 427 genera and 136 classes. Some of them are listed in the Red Book such as bach xanh, de tung soc trang, hoa tien, etc. Some species are introduced for the first time. Moreover, it is also the home to 334 species of animal including 23 rare and precious species which are listed in the Red Book such as Asiatic black bear, pangolin, white pheasants, etc. In terms of biology, the park is a valuable source of fauna and flora.  Ba Vi National Park was beneficial to the locals here since Dao people collected plant for medicine during the French colonial era. Da River which is located on the western side of the park is the only river flowing through this place with high speed while there are several streams running across the park, which are often small and flow quickly. In the rainy season, the volume of water is so enormous that water from the stream can overflow the ground while most of the streams are dry in the dry season. Moreover, there are some deep caves that hide in the mountains. You can explore these caves but it’s advisable not to enter inside the cave so deeply because there is no the guardian around, as a result, if the accident happens, you can’t ensure your safety. 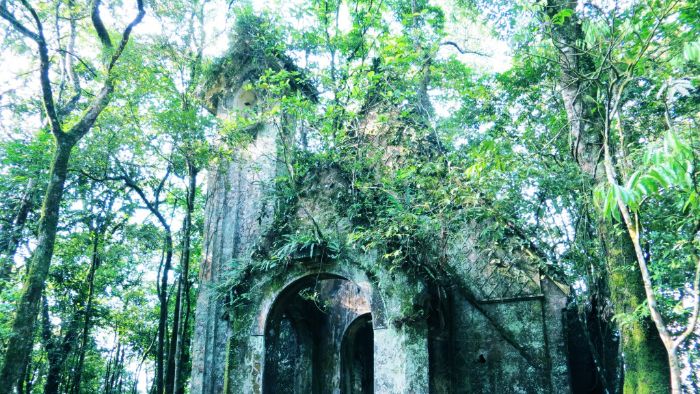 Establishments from the French colonial period

When French liked to invade Vietnam, they made Ba Vi become a station. They also built an orchid garden, ancient church, orphanage, motels of senior French officials, etc. All of these constructions of French architectural features are untilled now, remain the mystery, give a curiosity and surprise to the visitors. Nowadays the deserted ancient church is an attractive destination for the visitor. Many people come here and take photos. Even the newlywed also choose this place to take photos for the wedding album. Trekking until reach an altitude of 800m and you will find these ruins easily.

Climbing to the summit of the Tan Vien peak, you can reach Mountain Lord shrine. The Mountain Lord is one of the most important gods according to Vietnamese traditional creed. Among the immense jungles, it’s no surprise to find a shrine that locates in high position, worship the Lord who manages the whole huge majestic complex of the mountain. Stepping 1,300 stone steps, you will catch the Dinh Vua peak where Ho Chi Minh shrine and Bao Thien tower are located. In his lifetime, President Ho Chi Minh’s wish is that after the death, he wants his bone-ash to be buried in three locations, one of which is in Ba Vi. Ho Chi Minh shrine which is established to show honor, respect and gratitude toward the national hero has a close-to-nature architecture like the expectation of its owner.

Escape from the hustle life

Coming to Ba Vi national park will give you the opportunity to mingle with nature and relax in the best ways. Because of the mountainous topography, Ba Vi’s climate changes with altitude. However, in general, the weather is quite cool here. The air is extremely fresh. The higher you climb, the purer air is and the foggier it is. Take the effort to climb as high as possible, stand at the top of the mountain and you will have a chance to mix with clouds, mountains, rivers, streams, and lakes. Let’s close your eyes for a moment, take a deep breath, hear the beautiful sounds of the flowing streams and insects, the lovely birds singing and have the unique smell of soil. In sunny days, in this position, you can get a panoramic view of the Red River Valley or Hanoi with rising the high buildings.

“Why don’t you stand up and take the best Asia tours packages right now? Do not forget to take Vietnam tours packages to get more information about Ba Vi National Park as well as other Vietnamese amazing destinations. Vietnam is waiting for you!  Share the post if you find it useful. Have a nice trip!